Photos available for media use here on flickr
More will be added as available.

A link to the video of Governor Markell’s interview will be posted as soon as it’s available. 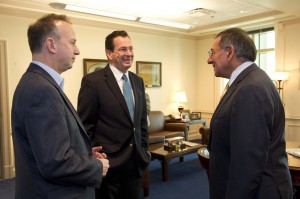 DOVER –  Governor Jack Markell is in Afghanistan this week visiting with Delaware Service members currently deployed in support of U.S. military operations. The Governor arrived in Afghanistan yesterday. Before departing, the Governor visited the Pentagon to meet with U.S. Defense Secretary Leon Panetta, receive briefings from senior military and visited with wounded soldiers getting physical and occupational therapy at the Walter Reed National Military Medical Center in Bethesda.

“At Walter Reed, I was able to see first-hand the reminders of the dangers that our servicemen and women face,” said Governor Markell. “I met three Delawareans, including a soldier from Sussex County who had endured 31 surgeries, after injuring his arm, with still more ahead of him,” said Governor Markell. “We are fortunate to have an incredible level of loyalty and patriotism in our soldiers and respect their selfless sacrifices.”

Governor Markell is traveling in Afghanistan and Kuwait with Connecticut Governor Dannel P. Malloy and other Department of Defense and military personnel as part of the Governors’ Delegation Program to visit deployed Service members overseas. The program, started in 2004, is a personal initiative of Secretary Panetta. Yesterday, the Governor met with Delaware National Guard and other troops, most of whom were from Kent and Sussex Counties. Tomorrow, he will visit with some troops from New Castle County. Last night, the Governor shared dinner with Delawareans at Camp Arifjan including Stephen Richter, a DELDOT civil engineer deployed to duty in Kuwait. Today, the Governor flew to Bagram and visited the hospital there. 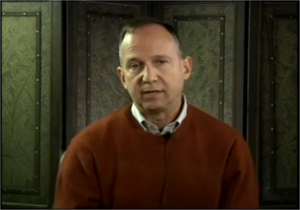 “What will probably haunt me for a long time is seeing a young soldier who had just arrived to the hospital after losing both his legs,” said the Governor. “It makes it so real. I will never forget these injured and dedicated soldiers and the commitment of people in the field and in the hospital. To see the level of dedication they bring to their jobs everyday is remarkable and inspiring.”

“To hear about their separation from families months on end is difficult,” said the Governor. “Yet, I am tremendously impressed by their morale. Morale has been outstanding, especially given conditions under which some soldiers are serving. They are paying an incredible price for the rest of us. It’s important we tell them how grateful we are – important for them to know they are remembered at home.”

“Many of their jobs are about reducing the capability and the will of insurgency, supporting the growth of Afghan security forces and facilitating improvements in governance and socio-economic development in order to provide a safe and secure environment going forward. The range of responsibilities is staggering and the complexities awe-inspiring ,” continued the Governor.

The Governor talked with members of the Delaware media during a noon-time conference call today, telling them, “I welcomed the opportunity to be here and to say thank you to Delawareans serving their country. I want Delawareans to come home quickly and safely. It’s so important that we are grateful and we watch after their families until they return. ”

“The men and women in our nation’s armed forces add honor each day to the proud legacy built by our veterans. I know how much their families must miss them, and I appreciate the Department of Defense giving us the opportunity to share directly with these troops our gratitude for their courage,” said Markell, who noted that the visit came during the period between Veterans Day and Thanksgiving.