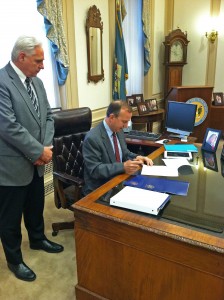 DOVER – Municipal electric rates in Delaware should start to go down by at least 10 percent under an agreement signed today. Gov. Jack Markell joined Patrick McCullar, President and CEO of the Delaware Municipal Electric Corporation (“DEMEC”), and the Mayors or town officials of Newark, New Castle, Middletown, Clayton, Smyrna, Dover, Milford, Lewes and Seaford to sign a Memorandum of Understanding (“MOU”) that underscores their shared commitment toward making municipal energy rates more competitive in order to spur job creation, while preserving the core functions and services provided to residents and businesses in the municipal service territories.

“Over the last three months, DEMEC and the towns rolled up their sleeves and worked diligently with us to find a way to lower electric utility rates without shifting the cost to the other essential and valuable services the towns provide, “ said Governor Markell.  “This memorandum of understanding strikes that balance. It sends a clear signal to businesses that Delaware and our towns and municipalities are ready to compete for jobs.” 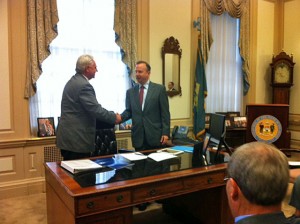 cap for the next five years at FY ’12 amounts the revenue that they transfer from their electrical utility to their general fund budget.  In return, as long as the DEMEC municipalities abide by the MOU, the Governor has agreed to oppose any legislation that would allow third-party supply in the municipal electric territories.

”DEMEC and its member communities share Governor Markell’s goal of making Delaware one of the most attractive and competitive locals in the world,” said Patrick McCullar, CEO of DEMEC.  “We recognize how important lower energy costs are to Delaware and appreciate the opportunity to work closely with the Governor toward our common goals.”

The Memorandum of Understanding was signed by the Governor and Mr. McCullar, who is authorized to sign on behalf of the DEMEC municipalities via a resolution enacted in each DEMEC municipality.  A copy of the final MOU is below.

MEMORANDUM OF UNDERSTANDING BETWEEN

THE DELAWARE MUNICIPAL ELECTRIC CORPORATION ON

BEHALF OF ITS NINE MUNICIPAL MEMBERS

This Memorandum of Understanding between the Honorable Jack Markell, Governor of the State of Delaware (“Governor”), and the Delaware Municipal Electric Corporation, a body corporate and politic formed pursuant to Title 26, Delaware Code, for itself and on behalf of the nine duly chartered municipalities comprising its membership, being New Castle, Newark, Middletown, Smyrna, Clayton, Dover, Milford, Lewes and Seaford (collectively, “DEMEC”, or the “DEMEC Municipalities”).

WHEREAS, the Governor and the DEMEC Municipalities are fully committed to and engaged in the task of attracting new businesses to Delaware and expanding existing Delaware businesses in order to provide job opportunities  for all Delawareans; and

WHEREAS, DEMEC and the DEMEC Municipalities are potential beneficiaries of the Governor’s job creation initiatives and accordingly, are fully  committed to aiding and supporting such initiatives consistent with the responsibilities vested in them by their charters; and

WHEREAS, the Governor has identified the commercial and industrial electric rates charged by certain of the DEMEC Municipalities-owned electric utilities as a potential disincentive for the recruitment of new businesses to, and the expansion of existing businesses in Delaware; and

WHEREAS, historically, the DEMEC Municipalities have used varying percentages of their return on investment in their municipal electric utilities to supplement general fund revenues in order to assure adequate funding for various essential and valuable municipal services provided to all of their residential, commercial and industrial customers, including sewer, water, public safety and street maintenance; and

WHEREAS, the Governor recognizes and appreciates both the critical importance to each of the DEMEC Municipalities of the supplemental revenues provided by their electric utilities to the provision of cost-effective funding for the full complement of municipal services, as well as the sovereign right of each of the municipalities pursuant to their home rule charters to control their respective budgetary processes and their exclusive right to provide electric power to their residential, commercial and industrial citizens; and

WHEREAS, the Governor and DEMEC find and determine that it is in the best interests of their respective constituencies to advance the shared goal of creating economic opportunity for all Delawareans without unduly encroaching upon the home rule authority of the DEMEC Municipalities.

NOW, THEREFORE, DO THE GOVERNOR AND DEMEC AGREE AS FOLLOWS:

IN WITNESS WHEREOF, AND INTENDING TO BE MORALLY BOUND HEREBY, the Governor and DEMEC have respectively executed and caused this Memorandum of Understanding to be executed this 9th day of May, 2012.

On behalf of its members