Dover – To tackle outdated, ineffective and redundant regulations while giving a boost to small business, Governor Jack Markell today signed an executive order that launches a statewide effort that brings citizens, businesses and state agencies together to identify and remove regulatory hurdles.

“Regulations, when properly used, can help meet shared goals. They can ensure the safety of the food we eat, the hospitals we visit, and the roads we drive. But regulations can become outdated and inconsistent.  They don’t work the way they were intended to work.   In short, they can become a problem, not part of a solution.  This is a statewide effort to find those problems and remove them,” said Markell, who has visited over 750 businesses in Delaware since his swearing-in.

Before the Governor signed the Order, he heard from a bipartisan group of legislators and a number of small business owners representing the National Federation of Independent Businesses.

“This reinforces Delaware’s ranking among the best places in the country to do business,” said NFIB State Director Ellen Valentino.  “Small businesses are deeply appreciative and we’re looking forward to working with the Governor’s administration to implement this order.”

Executive Order 36 requires executive branch agencies to take a close look at the regulations on their books that have been in place at least three years. It launches a public process to give citizens a chance to tell state agencies which regulations they believe are no longer working. Each executive agency will be required to hold at least one public forum in each county and accept written comments and suggestions.

At the conclusion of the public input period, each agency must evaluate the proposals and recommendations it received during the public comment period. In some cases, agencies may decide that a regulation serves a relevant policy purpose, is required by the federal government, or is valid for some other reason. In those cases, the regulation would stay in place. In other cases, the agency can revise and eliminate those regulations, in accordance with the procedures required under the APA, or Administrative Procedures Act. 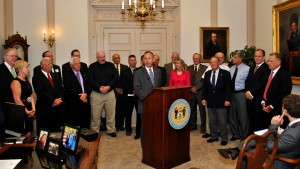 Under the executive order, no later than one year from today, the Governor’s Office will submit a report to General Assembly detailing the regulations eliminated or modified pursuant to this process.

“I couldn’t be more pleased with Governor Markell’s strong statement today in support of Delaware’s small business community. The state continually adds new laws and their accompanying regulations every year. If you own a small business, you do your best to be in compliance, but there is always the fear you are missing something due to decade upon decade of regulations,” said Rep. Bryon H. Short, D-Highland Woods, who co-chairs the bipartisan House Small Business Caucus. “With the signing of Executive Order 36, the governor has taken action on a four-year effort of the Small Business Caucus to create an
environment in Delaware where small businesses know they are supported and valued. The fact that the governor is sending top administration officials to hear directly from business owners regarding the state of regulations impacting their businesses and his recommitment to the Regulatory Flexibility Act of 1983 speaks volumes about his support for small businesses in Delaware.”

House Republican leader Greg Lavelle led a group of dozen Republican legislators who attended in support of the effort.

“With the exception of the Department of Education, none of our state agencies have a system for regularly reviewing their regulations.  This executive order will change that reality.  Regulations often carry the same weight as law and the process of how our state agencies craft, change and impose these rules is in need of reform.  All of our members support this effort as a
positive first step forward,” Lavelle said.

Representative Dan Short, the Republican co-chair of the House Small Business Caucus, endorsed the effort for the boost it will offer businesses but said it was critical that those businesses help with this effort by making their personal experiences with regulatory obstacles known. Short previously brought together a group of thirty Seaford-area businesses to meet with the Governor and has worked with the Governor on his business visits in the area.

Here is a link to the Executive Order. The text is below: http://governor.delaware.gov/orders/exec_order_36.shtml

TO:Heads Of All State Departments And Agencies

WHEREAS, as Governor, I am committed to growing Delaware’s economy, expanding economic opportunity for all Delawareans, and making State government more efficient and effective; and

WHEREAS, although State agency regulations are often necessary for the effective functioning of State government and the protection of public health, safety and the environment, we must strive to ensure that such regulations do not impose unnecessary burdens upon our residents, businesses and other organizations; and

WHEREAS, establishing a mechanism for the periodic review of existing regulations will help ensure that our State regulations continue to serve the original purpose for which they were adopted, and will provide a process by which improvements can be made to our regulatory framework; and

WHEREAS, citizens are often in the best position to identify outdated, duplicative or overly burdensome regulations and any review of Delaware’s existing regulatory regime must include a meaningful opportunity for public input from residents, business owners, employees, and other concerned citizens; and

WHEREAS, in order to be efficient with taxpayer dollars, the process for periodic review should be focused on and targeted at those regulations that have not been subject to review for at least three years for which substantive concerns exist; and

WHEREAS, it is appropriate for such a review to focus on older, well-established regulations because (1) such regulations are more likely to be outdated or otherwise no longer justified by present realities; and (2) a focus on such regulations will allow
state agencies to consider the real-world effects of regulations in light of economic, technological and other changes; and

WHEREAS, to reduce impediments to economic growth and improve the efficiency of state government, it is appropriate for State agencies to conduct a periodic, focused and targeted review of areas in which existing regulations may be reduced or streamlined – while reaffirming their commitment to enacting new regulations that are reasonable and that comply with all applicable laws, including the Regulatory Flexibility Act.

NOW, THEREFORE, I, JACK A. MARKELL, by virtue of the authority vested in me as Governor of the State of Delaware, do hereby DECLARE and ORDER, on this, the 14th day of June, 2012, that:

In accordance with the schedule below, each Executive Branch Agency shall solicit input from the business community, non-profit community and the general public to identify regulations adopted three years ago or more to be reviewed by the Agency for possible modification or elimination (the “Public Input Period”).  As set forth in paragraph (2) of this Executive Order, each Agency shall conduct at least one public hearing in each county in accordance with the APA, and shall also accept written submissions.

If an Agency determines that the number or complexity of its regulations requires a longer review period, such Agency may commence its Public Input Period prior to its corresponding starting date below.  However, such Agency shall in all events comply with the notice provisions of the APA, and in no event may the Public Input Period be extended beyond the Agency’s corresponding final date below.