DOVER – On National HIV Testing Day, Governor Jack Markell was joined by state officials, state legislators and HIV activists in Dover to sign Senate Bill 162, providing for routine HIV opt-out testing.  SB 162 implements the Centers for Disease Control and Prevention (CDC) recommendation that HIV testing should be part of the standard battery of medical tests.  The new rule will not only increase HIV testing, but help destigmatize such screenings and cement HIV testing’s place as part of regular medical care.  The bill preserves the opportunity for patients to decline the testing as with most other medical tests.

Delaware consistently ranks in the top 10 states per capita in AIDS cases in the U.S., and as many as 800 people in Delaware may have HIV right now and do not know it.

“The state has made great progress in reducing AIDS-related deaths and new HIV infections, but our greatest concern is the hidden cases,” said Governor Jack Markell.  “This is the next step in our battle to stop the spread of HIV. The sooner people know their status, the sooner they can seek treatment and learn how to prevent the spread of HIV to others.”

A person may show no symptoms at all for many years after being infected with HIV, but HIV is replicating in the body and can be transmitted to others before you even know you are sick. There is no cure for HIV, but effective medical treatment can control the advancement of the disease and can help reduce its transmission to others, including newborn infants. 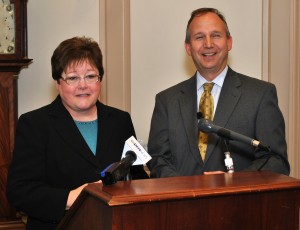 “This new law will not only save lives as more people are tested, it will prevent the transmission of HIV,” said state Sen. Patricia Blevins.  “I am enormously proud to have been part of its passage.”

Expanding the number of Delawareans tested not only saves lives, but is cost-effective. HIV can be detected by reliable, accurate and noninvasive screening tests through your doctor – or at free testing sites throughout the state. The lifetime cost of treating HIV, on the other hand, is estimated to be as much as $618,900, not including supportive services.

According to the CDC, a series of studies concluded that HIV testing is as cost-effective as other routine screening programs for diseases such as colon cancer and breast cancer.  Preventing the disease and its transmission to others saves lives and money.

Making these changes to the law helps expand HIV screening beyond the traditional, targeted high-risk populations to the general public.  Expanded testing is especially important as approximately 21 percent of people with HIV generally do not consider themselves to have been at risk for infection and so do not seek out HIV testing.  This group contributes to more than 50 percent of new infections.  If Delaware is able to increase routine testing among all populations, it is more likely to find individuals with HIV who do not know it, offer them treatment, and further slow the cycle of infection. 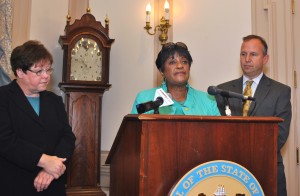 “As the State’s leader in facilitating HIV community planning and HIV/AIDS policy development, the Delaware HIV Consortium is particularly proud to have led the fight to help pass SB 162, routine opt-out testing for HIV,” said Peter Houle, executive director, HIV Consortium.  “The bill will help medical providers by streamlining the testing process, it will reduce the stigma still attached to this disease, assist in early detection and quicker linkage into medical care, improving the patient’s overall health outcomes and further reducing the transmission of HIV/AIDS.  This bill has been many years in coming.  Thank you to all of those who fought for the bill.”

SB 162 was supported by the HIV program of the Division of Public Health (DPH), and more than 40 private organizations from the health care, faith-based, and nonprofit sectors.

To find the closest free HIV testing, visit www.hivtest.org and type in your ZIP code. If you do not have internet access, call 1-800-CDC-INFO (1-800-232-4636). You can also visit the DPH HIV Prevention Program at www.dhss.delaware.gov/dph/dpc/hivaidsprogram.html for additional information.