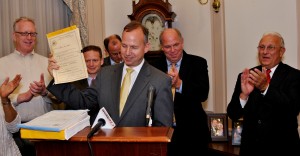 DOVER – Capping a legislative session that saw his legislative priorities implemented, Governor Jack Markell Saturday night signed a balanced budget that supports the goals he set forth in his State of the State address: capitalizing on our economic strengths, creating and supporting the workforce of tomorrow through stronger schools, governing responsibly and enhancing Delawareans quality of life.

“This session provided an opportunity for us to build on our existing strengths and to make sound choices to keep Delaware moving forward,” said Markell. “We created more opportunities to put Delawarean’s back to work, invested in our classrooms and our students and we stayed fiscally responsible while remaining committed to the safety and well-being of all Delawareans.”

The Governor thanked legislators for their efforts, which wrapped up after midnight. 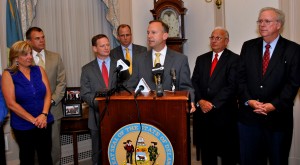 “Our strength resides in the capacity of our people, even in challenging times, to work with a common purpose,” said Markell. “I want to thank our legislators for, once again, putting aside their differences and partisanship and instead focusing on how we can create a greater State in which to work, live and visit.” 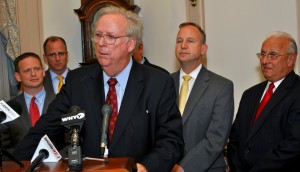