During Secretary Chu’s visit, University officials shared with him DSU’s current initiative to reduce energy consumption on campus by 25% by the year 2013. The University’s energy reduction initiative is part of its role as an institutional participant in President Barack Obama’s Better Building Challenge.

To achieve the reductions, DSU has entered into a guaranteed energy performance contract with Johnson Controls, the company hired for the work, which will ensure that the upgrades will result in the reduction goal.  The improvements are projected to save the University a net $5.3 million in energy costs over the next 20 years.

“Making our public buildings and schools more energy efficient is one of the easiest ways for universities and local communities to save money,” Secretary Chu said. “As part of the Better Buildings Challenge, Delaware State University is paving the way to long-term benefits for the school and the state. These efforts will reduce energy costs, support jobs, and help build an American economy that lasts.” 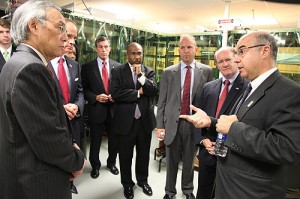 Gov. Markell said Secretary Chu’s visit sends a strong message that Delaware State University is on the right path toward helping the environment and reducing its carbon footprint.

DSU’s project involves the upgrades of 26 buildings on its campus in Dover, all designed to reduce energy consumption and costs. Among the upgrades are:

“In our goal to be the No. 1 Historically Black University in the country, we have to be an institutional leader in many areas,” Dr. Williams said. “While our Better Buildings Challenge initiative makes it clear that we take our responsibility as environmental stewards seriously, it also shows that we are determined to set a strong example that such achievable actions can indeed bring about achievable energy reductions.”

Sen. Carper commended DSU for taking “this bold approach to energy conservation” with the Better Buildings Challenge. “The cleanest form of energy is the energy we never use, and DSU is working on the cutting edge of this science,” Sen. Carper said.  “I am proud that Energy Secretary Chu has come to Delaware to get a first-hand look at this great example of environmental stewardship.”

Sen. Coons noted that energy efficiency programs have the power to lower costs, increase performance and reduce our nation’s dependence on foreign oil. He said DSU is proving itself to be a model for energy efficiency as it strives to meet its goals as a Better Building Challenge partner.

“As a member of the Senate Energy Committee, I am proud to join Secretary Chu in recognizing DSU’s efforts to reduce not only its carbon footprint, but its energy costs as well,” Sen. Coons said. “The Better Building Challenge program is a smart partnership between the public and private sectors, and I am thrilled that DSU is taking part.”

Rep. Carney called it a “win-win” for DSU and the state of Delaware.

“Delaware State University is making tremendous progress on its goal of reducing energy consumption 25 percent by 2015,” said Congressman Carney.  “I’m very pleased to have Secretary Chu here on campus to see the great work being done at DSU through the Better Buildings Challenge.   This is a smart investment that protects the environment and reduces DSU’s energy costs, freeing up resources to benefit its students.” 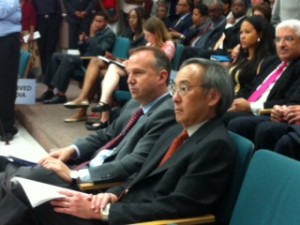 Amir Mohammadi, DSU executive vice president of finance and the University treasurer, noted that DSU’s initiative is projected to achieve the desired results faster than the established goals of the Obama Administration. “The Better Buildings Challenge is calling for an energy reduction of 20% by 2020, and DSU is projected to achieve a 25% reduction by 2013,” Mr. Mohammadi said.

To make the initiative a reality, DSU has entered into an agreement with Delaware Sustainable Energy Utility, Inc. (SEU), to fund the project. The University obtained energy efficient revenue bonds from the SEU as part of its inaugural issue of such funding.

Johnson Controls – the contract company hired to do the upgrade work – began the work on the University in April 2011 and is estimated to complete the project by December 2012.

The total DSU investment in the project is $19.3 million (principal and interest). With a guaranteed utility reduction providing an estimated savings of $24.6 million over 20 years, the net savings to the University during that period will be $5.3 million.

The initiative will also help reduce the University’s deferred maintenance of $58 million by almost 20%.