WILMINGTON – Standing with veterans, members of the Delaware National Guard and legislative leaders, Governor Jack Markell signed legislation creating a new effort to help put recent combat veterans to work when they return from service. The “Veterans’ Opportunity Tax Credit” will give companies a $1,500 annual tax credit for each recent veteran they hire. 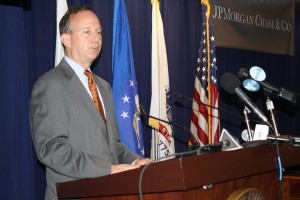 “Putting Delawareans, including our veterans, back to work is critical,” Governor Markell said. “Our Veterans’ Opportunity Tax Credit supports veterans in finding a job when they return home.  It’s the right thing to do for them, for our country and for business. ”

Rep. Earl Jaques, the lead sponsor of the bill, chair of the House Veterans Affairs Committee and himself a 36-year veteran of the Delaware National Guard, said that encouraging businesses to help returning veterans will have a positive effect on both the companies and the veterans.

“One in six homeless people are veterans, and with all of our military members returning home, we don’t want those numbers to swell,” said Rep. Jaques, D-Glasgow. “Today’s veteran is not from your father’s military. They are technologically savvy and have operated in some of the worst conditions imaginable, so companies who hire them will get an outstanding employee. I appreciate Governor Markell support through the signing of this bill into law.”

The Veterans Opportunity Tax credit will allow any business can take a tax credit of 10 percent of the gross wages paid to qualified veterans, with a cap of $1,500. The cap will continue for three tax years, so the total benefit to the employer could be $4,500 per veteran hired. The credit can be taken by any private sector business, and can be credited against personal income taxes, corporate income taxes, bank franchise taxes and insurance premium taxes. Because the tax credit is refundable, businesses without tax liabilities can use the tax credits immediately.

“We know veterans have a lot of skills that employers value – they are disciplined, willing to work and take responsibility,” said Sen. George H. Bunting Jr., D-Bethany Beach, who is a decorated Marine veteran of the Vietnam War and the lead Senate sponsor. “This incentive might give an employer the nudge they need to help our returning veterans land on their feet with a good job and I am grateful for the Governor’s support.”

Because the Veterans’ Opportunity Tax Credit is more significant than some other job creation programs launched during the Markell administration, businesses would not be able to double-count a qualifying veteran as a new hire under the New Economy Jobs Program tax credit, or tax credits for qualified investment in business facilities and targeted areas.

“This is an example of how support continues from our local legislators for our military,” said Maj. Gen. Francis D. Vavala, adjutant general of the Delaware National Guard. “The economy is still a challenge and it’s this type of action that is beneficial to our military and especially small businesses. We are appreciative and applaud the initiative.”

JPMorgan Chase, the site of Tuesday’s bill signing, is one company that has taken the lead in putting Delawareans back to work. Earlier this year, the company announced plans to expand its operations in Delaware and add up to 1,200 new jobs in the state. In addition, they are committed to helping our returning veterans find employment. Early in 2011, JPMorgan Chase established its Office of Military and Veterans Affairs charged with developing a firm-wide, comprehensive strategy focused on jobs, military and veteran homeownership, and education. The company has committed resources across the company to address the issues facing service members, veterans and their families. 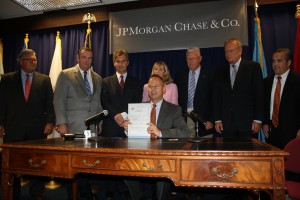 “We applaud the governor’s leadership in providing incentives for Delaware businesses to hire veterans,” said Keith Schuck, an Army veteran and president of Chase Bank, NA. “I am proud of JPMorgan Chase’s efforts, which are not simply about hiring veterans but providing them with the skills and training they need to turn that job into a meaningful career. Since 2011, we have hired nearly 100 veterans in Delaware, thousands more around the country and are committed to hiring more veterans through the 100,000 Jobs Mission.”

The credit focused on helping combat veterans, would be available only for hiring a veteran who has served recently in a hostile theatre, as evidenced by receipt of an Afghanistan Campaign Medal, Iraq Campaign Medal, or Global War on Terrorism Expeditionary Medal (which covers the Middle East, portions of Africa, and many other countries).  Those medals are available to service members who served 30 continuous days (or 60 days if non-continuous) in the relevant theatre. The time requirement is waived for service members who took part in combat or were wounded in the line of duty while in theatre.