More than 340 Delaware kindergarteners this fall will begin their study of either Mandarin Chinese or Spanish in an elementary immersion program and be able to continue that study into middle school, thanks to the launch of the Governor’s World Language Expansion Initiative.

“World language capacity is crucial for Delaware to maintain and strengthen our state’s economy,” Gov. Jack Markell said. “Delaware graduates who enter the job market able to speak a language other than English will be at a significant advantage in today’s global marketplace. We want students in Delaware to have the challenge and the opportunity to learn another language before they reach high school.”

In an immersion program, students learn academic content through a second language. They learn the second language by encountering and using the language in multiple meaningful contexts. The focus is on building proficiency – being able to use the language – not on teaching grammar.

Delaware’s program will include 50 percent instruction in the world language and 50 percent in English. Classes will have two teachers – one for each language. The program will coexist with traditional instruction. The program includes one-way immersion, with predominantly native English speakers, as well as two-way immersion, with two language groups such as native English and native Spanish speakers.

Students continuing in the program will be able to achieve Advanced Placement credit by ninth grade and will be encouraged to begin study of an additional world language, such as Arabic, that could also culminate in additional Advanced Placement credit by graduation. Delaware students also may be able to participate in dual-credit options with Delaware institutions of higher education to further their language abilities and enter college with a number of world language credits that could easily count toward a minor or major in the language.

Each school saw a great demand for the limited number of seats in the first year of the program; in Caesar Rodney, 285 students expressed interest in the 100 available spaces.

“Our students and parents have embraced this opportunity because they know how important it is for our children to learn a world language and to start doing so as early as possible,” Caesar Rodney Superintendent Dr. Kevin Fitzgerald said.

Thanks to Gov. Jack Markell’s annual investment of $1.9 million, the program targets to reach nearly 8,000 students in K-8 immersion programs by 2020. 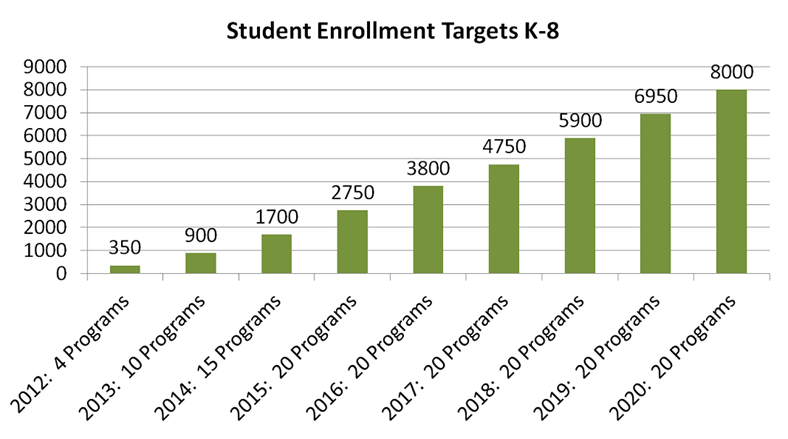 More information about immersion and Delaware’s program is available here.

About a dozen visiting teachers from China and Spain will engage in a four-day professional development institute next week as they prepare to teach Chinese and Spanish to students in immersion classrooms across the state this fall. Seven educators, six of whom are visiting international teachers, are part of the Governor’s World Language Expansion Initiative immersion program. Five more are part of the immersion program incorporated in the Race to the Top Partnership Zone plan of Lewis Dual Language Elementary in the Red Clay Consolidated School District. These teachers will be joined at the first annual Delaware Immersion Institute by school and district administrators, state Department of Education personnel and other teachers from Spain, China and France who are visiting as part of other programs but not part of the immersion initiative.

The institute aims to provide teachers with an overview of the Delaware World Language Immersion program model, familiarize them with the standards used to guide learning and give them an understanding of core instructional strategies that are key to making language understandable by students enrolled in immersion programs cross the state.

During the institute, teachers also will review instructional resources used in the program, learn how to address both academic and social language when planning lessons, review the proficiency anchors for their grade level and collaborate with their English partner teachers to help ensure both languages are used effectively to advance student learning.