Law Limits Hours Most Dogs Can Be Tethered

STANTON, DE – At the Delaware SPCA in Stanton, surrounded by representatives of Delaware’s animal shelter communities, Governor Markell signed into law a Senate Bill 211 which enhances Delaware’s definition of cruelty to animals by amending the definition of cruelty to animals to include tethering a dog for 18 or more hours in any 24-hour period.  The law also bans tethering very young dogs and certain nursing mother dogs, regardless of how long they are tethered. 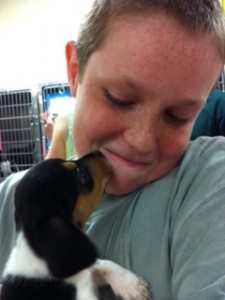 “It’s not okay to leave dogs, which by their nature are both social and territorial animals, alone for extended periods of time,” Governor Markell said. “Most pet owners don’t deliberately keep dogs tied up for long hours, but unfortunately, there are situations where this occurs and we want to prevent cruelty to animals.”

The law affects dog owners who live on lots of less than 10 acres, who are now banned from keeping dogs tied up longer than 18 hours at a time.  Violators face possible prosecution on animal cruelty charges.  In extreme cases, the law would empower animal control officers to take a dog from their owners but animal shelter representatives and others hope such actions would be rare.

This is the latest in a series of bills aimed at improving animal welfare in Delaware and was supported by groups, including the Delaware and Kent County SPCAs, the Humane Society of the United States’ Delaware Chapter and the Delaware Humane Association.

Senate Majority Leader Patricia Blevins, D-Elsmere, who has been a leader in taking action to protect the state’s pet population, sponsored the new law. She said the damage done to dogs that spend their lives tied up can be shocking.

“Dogs need social interaction and companionship to develop properly and depriving them of it can really do them harm,” Blevins said. “Dogs that are constantly tethered have been become aggressive in defense of their territory and bite people. It’s a situation that we should not tolerate and I’m pleased that my colleagues and the governor agree with me.” 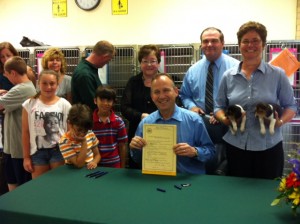 “We’re very happy that Delaware now prohibits 24 hour tethering of dogs,” said Anne Cavanaugh, Executive Director, Delaware SPCA.  “This is an important addition to our anti-cruelty efforts; we do not believe that dogs should spend their lives on the end of a chain. Thank you to all the Delawareans that supported this bill and to the legislators who voted for its passage.”