Within 18 hours of being plucked off the vine, a watermelon will arr 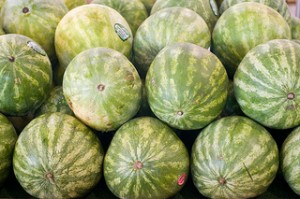 ive in the produce bins of Stop & Shop, Shaw’s and Whole Foods markets around Boston, waiting to be sliced into.

But odds are that the dripping-with-flavor watermelon comes not from Massachusetts, or even Connecticut or Rhode Island. It probably just made its way more than 400 miles from the fields of Maryland and Delaware, which this month will produce about 20 percent of the nation’s watermelon harvest.

During August, as part of a campaign by regional farmers to raise awareness of the watermelon that New Englanders enjoy so much, Mar-Delicious watermelon will be promoted through a radio and print advertising campaign supported by the Maryland and Delaware Departments of Agriculture.

“We want shoppers to know where their food comes from, and the best watermelon comes from Maryland and Delaware,” said Jay Rider, a Laurel, Del.,-area farmer and president of the Mar-Del Watermelon Association. “We work year-round to make sure that families have the sweetest and juiciest watermelon anywhere.”

Watermelons that bear the Mar-Delicious logo are ripened on the vine, which increases their sweetness. Watermelon stops ripening when it is harvested, so the fresher you can buy it, the better it tastes. And taste, juiciness/coolness and seasonal availability are the top reasons consumers in the Northeast buy watermelon, according to surveys by the National Watermelon Promotion Board. The watermelon season is relatively short, from July to September, and August is a prime production month, so consumers should ask for them when they shop.

Where do all these fresh watermelons come from? Not from large corporate production fields, but from the farms of about 50 independent family farmers in Delaware and Maryland, all members of the Mar-Del Watermelon Association.

“We are proud of our product and our work,” said Laurel, Del.-area farmer Mark Collins, immediate past president of the Mar-Del Watermelon Association. “You only see watermelons on the vine for a few months of the year, but it takes a lot of time and hard effort in advance. And it’s really a family affair, with our sons and daughters growing up in the business.”

The promotional campaign is supported by the Delaware and Maryland Departments of Agriculture and a Specialty Crop Block Grant from the U.S. Department of Agriculture. The initiative will also trace the impact of sales against data from previous years.

“The New England market, especially Boston, is an important one for our growers and brokers,” said Delaware Secretary of Agriculture Ed Kee. “This is a good opportunity to support our family farmers and build the regional brand.”

“We have a long history of bringing some of the freshest, most nutritious produce from local farming communities to larger cities in the Chesapeake Bay region,” said Maryland Secretary of Agriculture Buddy Hance. “We look forward to continuing the tradition into New England as well.”

The five New England states of Massachusetts, Maine, New Hampshire, Vermont and Rhode Island produce few watermelons – just 49 acres recorded in the last Census of Agriculture – and thus get most of their melons from other states. Of the other major watermelon producers, Maryland and Delaware are closest and able to get their products to New England in the shortest amount of time.

Maryland and Delaware watermelon acreage has been relatively stable, but production and yields have risen over the last three years as demand has surged nationally. Delaware and Maryland combined to ship 172 million pounds of watermelon last year, valued at $22.4 million. Delaware produced 1,050,000 pounds and Maryland 672,000 pounds.

Mar-Delicious watermelon is nearly local to New England families, coming to markets within 12 to 18 hours after being picked. To highlight the closeness and connections, Mar-Del Watermelon Queen Terra Tatman will be visiting several stores around the Boston area during a three-day visit to New England this week, giving out free samples of watermelon slices to shoppers and sharing nutritional information and recipes.

Tatman, 20, is an agricultural economics student at the University of Kentucky who grew up near Milford, Del. She said one of the best parts of her role as Queen is helping shoppers learn about how they can use watermelon in different ways.

“Traditional fresh-cut slices are delicious, but you can also use watermelon in a variety of recipes,” Tatman said. “There are salsas, sorbets and drinks, all of which are cooling and refreshing. Watermelon also works nicely in salads – try mixing with plums, Mozzarella cheese or tomatoes – or serve with fish or shrimp to add for a hint of sweetness to a savory dish.”