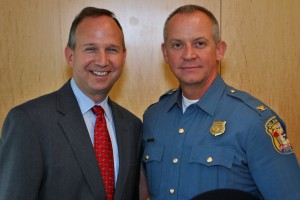 Sponsored by a bipartisan group of legislators, the Justice Reinvestment Act (SB 226) promotes informed decision-making in the criminal justice system by institutionalizing the use of evidenced-based practices in decisions concerning bail, rehabilitation and probation supervision, and helps ensure scarce resources are focused on higher-risk offenders.

“We owe it to Delawareans to ensure that our criminal justice spending is wisely invested to have the biggest impact on public safety.  If we can properly allocate that spending to focus on programming that reduces recidivism and prevents future crime we can have a significant impact on the safety of our communities,” said Governor Jack Markell.  “The Justice Reinvestment Task Force has developed a set of recommendations that could have significant impact.”

·         Pretrial Risk Assessment. The Act requires implementation of an objective assessment instrument that gauges defendants’ risk of flight and re-arrest to help magistrates make informed decisions about the terms or conditions of pre-trial release. The Act also requires the Statistical Analysis Center (SAC) to provide magistrates with data on rates of re-arrest and failures to appear for scheduled court dates, creating a track record for release decisions and help improve future decision-making.

·         Risk and Needs Information at Sentencing. The Act provides that the court may request an objective risk and needs assessment by the Department of Correction (DOC) for use in sentencing.

·         Program Completion and Earned Compliance Credits. To incentivize completion of evidence-based programs that reduce recidivism, offenders may reduce time served by up to 60 days per year if they complete programs successfully. Offenders under community supervision may earn credit for successful compliance with conditions of probation.

·         Case Planning. The Act requires DOC to use a risk assessment instrument for case planning and will use evidence-based programs to reduce offender risk.

·         Assessment of Community-Based Services. The Act directs the DOC to evaluate the availability of community-based programs that reduce risk of re-offense.

·         Recidivism Study. The SAC is required to produce annually a recidivism report of one-year, two-year, and three-year rates of re-arrest, reconviction and recommitment.

“This new law will help focus our resources on making sure our limited prison space is used for the people who pose the greatest danger to society while ensuring that everyone who breaks the law is still held accountable,” said Senate Majority Leader Patricia Blevins, D-Elsmere, who sponsored the measure. “It represents a real effort by our criminal justice community to modernize the way we handle offenders throughout the process.”

Senator Liane Sorenson (R-Hockessin) who, along with the other primary sponsors of the bill, served on the task force says what she likes best about the bill is the use of evidence-based practices.

State Representative Greg Lavelle (R-Sharpley), a member of the Justice Reinvestment Task Force, said, “It was an honor to be part of this process.  The task force focused on dealing with systemic problems within the criminal justice system and I believe Senate Bill 226 will go a long way toward lowering Delaware’s recidivism rate, as well as ensuring that higher-risk offenders are held more accountable and that our probation and parole populations are better supervised.  This new law will also ensure that tax dollars being spent within the criminal justice system are used in the most efficient manner. 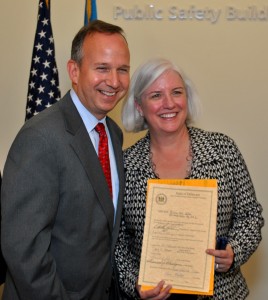 I look forward to improved outcomes as a result of today’s enactment.”

“The law signed today sets us on a path toward meeting the goals of the Task Force,” said Drew Fennell, Executive Director of the Delaware Criminal Justice Council.  “The provisions of SB226 are intended to reduce recidivism—the rate at which those exiting prison commit new crimes. Recidivism is the best measure of a prison system’s effectiveness, and reducing recidivism is the key to public safety. Research shows that the most effective use of corrections dollars is to target moderate- to high-risk offenders.  By concentrating prison and supervision resources on these individuals, Delaware positions itself to protect public safety using the best available science.”

The State of Delaware spends more than $250 million annually on corrections expenses. For more than a year, the State of Delaware has been working diligently to improve the administration of our criminal justice system through our Justice Reinvestment Task Force.  Led by Lieutenant Governor Matt Denn, the Justice Reinvestment Task Force is a bipartisan and multidisciplinary group of judges, legislators, attorneys, law enforcement professionals, and corrections officials dedicated to adopting evidence-based strategies to improve public safety and allocate criminal justice resources appropriately.

The Governor also talked about focusing on Justice Reinvestment in his State of the State address in 2011 with the goal of identifying new strategies to reduce crime and recidivism; control the growth in the prison population, protect and support victims and focus on offenders that present the greatest threat. 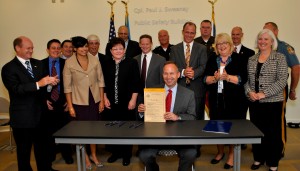 The State of Delaware received support for the justice reinvestment initiative from the U.S. Department of Justice’s Bureau of Justice Assistance.  Technical support was provided by the Vera Institute of Justice, which provides assistance to government leaders to improve the systems people rely on for justice for safety.