The Act requires the Delaware Department of Safety and Homeland Security to work with schools, districts and first

responders to develop comprehensive, up-to-date safety plans.  It also  lays out the responsibilities of the department, schools and districts in meeting the goal of bringing comprehensive school safety plans to each public school (including charters) in the state.

“We want our kids to go as far as their potential will take them but, we can’t control everything.   For students to learn to the best of their abilities, they need, first and foremost, to be safe,” said Governor Jack Markell.  “Our goal is to bring comprehensive school safety plans to every public school and district in our state. This law is an important part of an ambitious, multi-year effort to make our schools and the students in our schools safer.”

“The time spent in school represents a sacred trust that we must honor by making certain our schools are safe each and every day,” said Lewis Schiliro, Delaware Secretary of Safety and Homeland Security.  “Today, we begin the process of bringing all 219 public schools operating in our state under one common safety protocol, making Delaware the first state in the country to do so.”

“Developing a consistent approach to handling emergencies in our schools will help our first responders in dealing with a crisis situation,” said Senator David Sokola (D-Newark), who sponsored the measure. “It also should help give students, parents, teachers and administrators more peace of mind by knowing that people won’t be scrambling to deal with an unexpected crisis situation.”

“What this bill does is direct the right people to issues,” said Representative Dennis E. Williams (D-Talleyville), lead sponsor in the House.  “This takes advantage of the expertise of Capitol Police in building security and allows school administrators to focus on their tasks.” 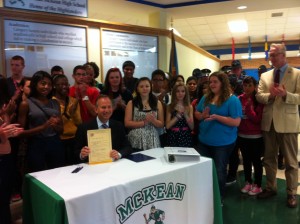 “No one thinks a disaster or tragedy can or will happen to them,” said School Resource Officer for Milford schools, Milford Private First Class Officer Joe Melvin.   “While the probably is not high, the possibility that something can happen warrants our preparation.”

Rafael Velez, a tenth grader at McKean said, “Some people decide to do terrible things in schools.  We have to be more careful every year.”

Under the Act, the  Department of Safety and Homeland Security will lead the effort to bring comprehensive school safety plans statewide.  The Department’s responsibilities include:

Much of the “ground level” work, such as preparing plans and conducting exercises with schools, will be done by Capitol Police, an entity that is already responsible for securing state buildings and facilities.

Ultimately, the goal of the Omnibus School Safety Act is for each school and district to have a safety plan with four key elements: