“This proclamation hopefully draws awareness to an issue that merits our attention year-round,” said Governor Jack Markell. “We must be vigilant and supportive every day of those around us to ensure they are safe and free from abuse.”

Delaware created the Domestic Violence Coordinating Council to improve the state’s response to domestic violence.  The council brings together domestic violence service providers and policy level officials to identify and implement improvements in system response through legislation, education and policies.

“Domestic violence has impacts that ripple throughout society,” said Senate Majority Leader Patricia Blevins, D-Elsmere, who has been at the forefront of efforts to protect victims of domestic violence and is the chair of the DVCC. “While combating domestic violence is a year round job, this month gives us an opportunity to put a spotlight on it and to remind people, dealing with this threat to their safety and the safety of their families, that there are laws to protect them and help available to them so they can break the grip domestic violence has on their lives.

Added Carol Post, the executive director of the Delaware Coalition Against Domestic Violence: “Domestic Violence Awareness Month gives us the opportunity to highlight all the great work being done in Delaware by both government agencies and nonprofit organizations to protect victims of domestic violence and their children, hold abusive partners responsible for the violence and engage in prevention efforts aimed at ending the violence once and for all.”

“Domestic Violence Awareness Month sends a clear message that this country does not tolerate violence against women,” Biden said. “Incidents of domestic violence have dropped more than 50 percent nationally since Congress first passed the Violence Against Women Act in 1994, but we still have a lot of work to do. Every day, three women are killed abusive husbands or partners. Congress should reauthorize VAWA as soon as possible so that the bright light 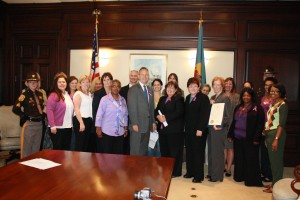 keeps shining for the millions of women and families still in the darkness.”

Last year the state’s Department of Correction created a Victim Services Unit to assist victims and survivors in becoming both informed and involved so that they may experience less frustration and trauma with prison and probation personnel and be better prepared to participate in the corrections process if they choose. The DOC’s Victim Services Unit phone number, which is staffed during regular business hours Monday through Friday, is (302) 857-5440.

“Proclaiming October as Domestic Violence Awareness Month provides an opportunity to raise the issue of domestic violence to the forefront of discussion and provide much-needed support to victims of a crime that affects people regardless of their age, ethnicity or economic status,” said DOC Commissioner Carl Danberg, who is also the vice-chair of the DVCC. “The fact that one in every four women will experience domestic violence in her lifetime is a staggering indicator of how widespread this crime is within our communities. May we use this month’s opportunity of increased awareness to educate and then start working toward ending this violence.”