Wilmington, DE – Coinciding with October as National Bullying Prevention month, Governor Markell helped to officially launch DEleteBullying.org, a new online resource to highlight and support bullying prevention efforts in the First State. Created and funded by the Delaware Bar Foundation, this website provides information and helpful resources for children, parents and educators regarding how to address and prevent instances of bullying. 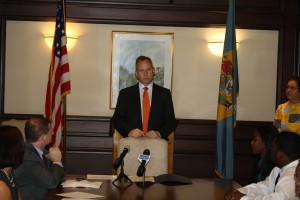 “Bullying is a significant and serious problem for far too many of our students,” said Governor Markell. “An online resource will give young people and adults the knowledge and tools they need to cope with situations that occur and help prevent bullying from taking place to begin with.”

In response to several incidents of suicide caused by bullying, a consortium was convened in 2010 by Family Court Chief Judge Chandlee Johnson Kuhn. It has since been led by Rep. Melanie George Smith. In their efforts to identify what was being done in Delaware to address bullying prevention, the group realized many organizations were doing excellent work, but resources were spread out and difficult for families to navigate. It was then that the idea of creating a statewide website focused on Delaware’s bullying prevention efforts was formed.

“The Delaware Bar Foundation has a broad mission to improve the administration of justice in Delaware, which includes educating the public about the rule of law,” said Jacqueline Paradee Mette of the Delaware Bar Foundation, who was part of the initial consortium. “Delaware has bullying statutes, so creating a website that pulls together all of these resources into one convenient, easy-to-use website that is user-friendly and Delaware focused fit within the Foundation’s mission.”

The website complements two bills signed into law earlier this year. A direct result of work done by the Lt. Governor and the Attorney General in cooperation with the strong sponsorship of House and Senate Education Chairs Sen. David Sokola and Rep. Terry Schooley, the laws focus on implementing Delaware’s first uniform policy to combat cyberbullying in public schools, as well as protecting students against bullying by requiring consistency in how bullying incidents are reported.

“As I have visited middle schools and high schools over the past two school years, cyberbullying has consistently been raised with me by principals and teachers as a real problem that stops them from focusing on educating kids,” Lt. Governor Denn said.

“We know how devastating bullying can be, not only to a child who is targeted but to their families, communities and schools.  That’s why I am proud to be a part of the collaboration that has produced this website,” said Attorney General Beau Biden. “Along with Delaware’s enhanced bullying reporting requirements and cyberbullying policy, the site provides information and tools  that will help both kids and adults effect real change. Working together, we can make sure our schools and communities are safe environments where bullying is never tolerated and children can thrive.” 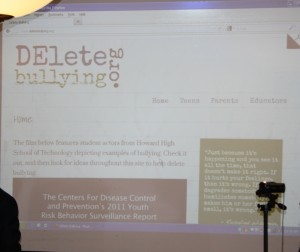 Users who visit the site will find pages specifically targeted to teens, parents and educators. For parents, the website discusses, among other things, how bullying is defined in Delaware, signs of bullying, how to know if your child is a target of bullying, and how to report it, both to school authorities and the Attorney General’s bullying reporting hotline. For teens, the website addresses what bullying looks and feels like and how teens might handle it. It reminds teens they are not alone, and that with the help of their peers and trusted adults, they can put an end to bullying. It includes helpful information specifically for our LGBTQ youth, and a number of resources, both state and national, on peer relationship building and other helpful resources. For educators, the website includes several classroom lesson plans and worksheets, created by Cape Henlopen High School and others. These resources are easily downloaded and printable for educators to use in their schools.

In addition, the homepage of the website shows a video produced by The Morris Project and featuring students from Howard High School of Technology. The film depicts what some incidents of bullying can look like, how it feels to be the target of bullying and how teens can respond to it. Howard High School has been named Delaware’s first bully-free school, with 100% of its students signing a no bully pledge for the past two years.

In addition to the funding provided by the Delaware Bar Foundation, several other individuals, organizations and agencies were a part of its development, including: Dr. Julie Hubbard, an expert on bullying and the Director of the Clinical Science Doctoral Program in the Department of Psychology at the University of Delaware; Bob Martz, of the United Way; Jan Dalle Pazze and the Delaware Bullying Prevention Association; and the Delaware Departments of Justice, Education and Services for Children, Youth and Their Families.

Photos from today’s event can be found in this Flickr album.