“We are increasingly reliant on information systems to maintain and enhance government services for citizens,” said Governor Markell. “It’s vital we remain diligent in our efforts to ensure those systems and the information they contain are secure.” 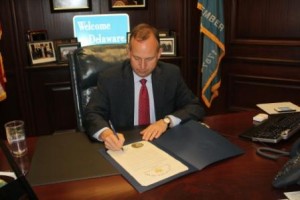 Delaware’s efforts, spearheaded by the Department of Technology and Information, recently received national recognition from the Center for Internet Security (CIS), a not-for-profit organization dedicated to improving cyber security in the public and private sectors. CIS conducted its 4th annual Best of the Web contest to recognize state and local governments that use their websites to promote cyber security. The State of Delaware was the winner in the State Government Category.

As part of a month-long awareness campaign, Delaware will join other states in promoting the Stop. Think. Connect. campaign, which aims to help Americans be more vigilant in practicing safe, online habits.