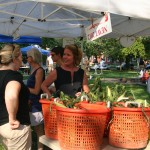 according to the Delaware Department of Agriculture.

“Our farmers’ markets are a great symbol of how communities can shape their local economy and support our farmers and businesses,” said Gov. Jack Markell. “My family enjoys many items from Delaware farms and farmers’ markets, and is happy to join in celebrating this banner year.”

The 29 markets sold $1.96 million worth of goods during the 2012 season, with produce making up 57 percent of the total sales, or $1.1 million. Other sales included value-added products, such as meats, cheeses, jellies, breads, salsa, eggs or honey.

The record sales figures and the record number of markets this year show that Delaware agriculture has a strong place in the hearts of residents, said Secretary of Agriculture Ed Kee.

“Farmers’ markets benefit both farmers and consumers by bringing neighbors together,” Kee said. “Those connections are stronger this year than ever before, thanks to a growing interest in local foods and healthy eating, and we want to help forge more of those bonds in the future.”

This year also saw the launch of a pilot project offering Electronic Benefits Transfer (EBT) card transactions this year at two markets, allowing families to purchase local produce and food items as part of the Supplemental Nutrition Assistance Program. That initiative offered transactions at the Cool Spring and Village Fresh markets, both in Wilmington. Several other markets are considering expanding into the program in 2013.

The farmers’ markets are supported and coordinated by the Delaware Department of Agriculture, but are funded and hosted by local groups, organizations and municipal governments.

Farmers and others interested in becoming a vendor, or community groups interested in starting a local market, can contact Department of Agriculture marketing specialist David Smith at (302) 698-4522 or davidm.smith@delaware.gov.