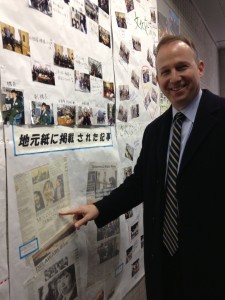 (Wilmington, DE)  As part of his week-long economic development and goodwill trip to Japan and Korea, and in lieu of his regularly scheduled weekly message, Governor Markell participated in two Google+ Hangout events while overseas. On Tuesday, December 11, he participated in a hangout from Japan with Japanese language students at Appoquinimink High School and members of the media. The Governor discussed the purpose of his international trip and the exchange with Miyagi Governor Yoshihiro Murai, which acknowledged 15 years of sister state relations between Delaware and Miyagi.

“The way we do business has fundamentally changed with the increasing use of these technologies,” said Governor Markell. “The more familiar our young people are with these tools and the more they are given the opportunity to use them in the classroom, the greater their chance of success will be when they go to compete for jobs in a global economy.”

Later that week, on Friday, December 14, he and Agriculture Secretary Ed Kee participated in a hangout from Korea with University of Delaware staff, members of Delaware’s agriculture community and media at the University of Delaware’s Carvel Research and Education Center in Georgetown, DE. The Governor discussed his visit with Harim Group, the leading agribusiness in Korea, which bought Delaware-owned Allen Family Food in 2011. He also discussed a visit he had with leaders and members of the Korean Chamber of Commerce.

“We are part of a global market,” said Governor Markell. “In order to make sure Delaware companies have as many opportunities as possible to export and expand their products, we must continually work to strengthen relationships with others around the world.” 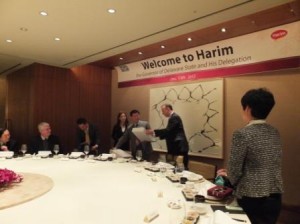 “Nearly one-third of the world population lives within the band that includes Korea, Japan, China and Indonesia,” said Secretary Kee. “As we, in Delaware, continue to explore new ways to service that population with our exports, it is important we take advantage of opportunities to conduct business and communicate with our global customers.”

Beyond business development and goodwill opportunities for Delaware, this trip also offered a chance to try new technology. In addition to the Google+ hangout sessions, the Governor officially launched his Instagram account on this trip, posting photos of various scenes; and he used a Google Map to document his whereabouts with photos, videos and pinpointed information.