Chilean Ambassador Bulnes and Governor Jack Markell welcome the arrival of the first Chilean fruit vessel to the US for the 2012-2013 season at the Port of Wilmington, Delaware 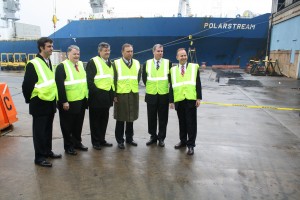 welcomed this year’s first shipment of Chilean winter fruit to the US onboard Pacific Seaways’ (PSW) chartered refrigerated breakbulk vessel m/v Polarstream on Monday, December 17. Wilmington is the nation’s leading marine terminal for imports of perishable cargoes and a major port of entry and distribution center for Chilean fruit.  This is the third consecutive Chilean fruit season that Delaware’s seaport has enjoyed the prestige and honor of receiving the season’s first ship call to the US.

“We are gathered here t 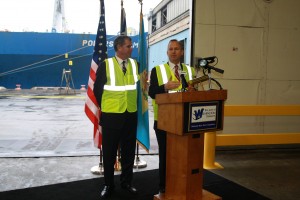 oday to commemorate the strong fruit trade partnership that exists between Chile and the state of Delaware, reflected by the arrival of the first vessel of the 2012/2013 season carrying Chilean fruit at the Port of Wilmington, one of the main gateways in the East Coast for shipments of Chilean fresh fruit. Over the past decades this industry has been one of the most dynamic and innovative sectors of the Chilean economy and the US is the main destination market for our agricultural products. We look forward to further strengthening the relationship between Chile and the State of Delaware,” said Ambassador Felipe Bulnes.

“We are excited and honored that Delaware’s seaport is the doorway through which Chilean fruit enters into North American homes this holiday season,” said Governor Jack Markell. “Our robust bilateral trade and long and strong friendship with Chile create many good jobs and stimulates the economies on both sides of the equator and we are working to continue growing it into the future,” he added.

The Port of Wilmington handled 15.9 million cases of Chilean fruit at estimated retail value of $600 million during the 2011-2012 season. The cargo was stored in the Port’s 800,000 sf on-dock cold-store, North America’s largest, before distribution as far north as Canada’s maritime provinces and as far west as the Mississippi River. Chilean fruit trade via Delaware’s seaport annually supports 750 quality, family sustaining jobs, and generates $40 million in personal income, $42 million in business revenue and $4 million in tax revenue for the State and the region.

PSW has chartered six of the world’s largest, and most modern specialized reefer ships to transport this year’s Chilean fruit imports to Wilmington, Delaware. The Port of Wilmington anticipates a total of 25-26 ship-calls from the Chilean ports of Valparaiso, Coquimbo and Caldera. Pacific Seaways is the only carrier to provide a direct service from Chile to the Port of Wilmington. 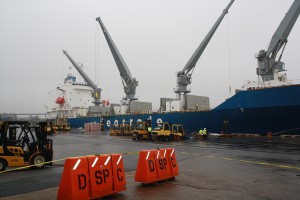 About the Port of Wilmington, Delaware

Founded in 1923, the Port of Wilmington is a full service Mid-Atlantic seaport on the Delaware River strategically located to provide overnight access to 200 million North American consumers. Wilmington ranks as North America’s top  banana port and the nation’s leading gateway for imports of fresh fruit and juice concentrates. Recently, the Port was certified as a 360 Quality marine terminal, one of three in the nation, underscoring its high quality handling standards for perishable cargo. An economic engine for the State of Delaware and the region, it is responsible for over 4,300 jobs $337 million in business revenue, $315 million in personal income and $31 million in annual local taxes. The Port is owned and operated by the Diamond State Port Corporation, a corporation of the State of Delaware.