“This case highlights why we need the Child Predator Task Force and its single-minded dedication to protecting our kids,” Biden stated.

The investigation led to the execution of a search warrant on December 19 by Task Force personnel, along with support from Delaware State Police Troopers, at a residence on Mandolin Court, Old Mill Village, Newark.  While executing the search warrant, detectives identified resident John M. Figura, age 42, a person of interest in the investigation, and took him to Troop #2 for questioning.  Detectives also seized several computers, large amounts of digital devices, and other physical evidence depicting images of children.  A forensic preview of the seized evidence revealed multiple videos of child pornography.

Based on the evidence, Figura was arrested and charged with 25 counts of Dealing in Child Pornography.  He was arraigned by videophone by JP Court #2 and was taken to James T. Vaughn Correctional Center in lieu of $1.5 million cash bail.

A booking image of Figura follows: 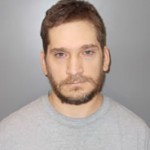