(Wilmington, DE) – With the support of legislators and law enforcement agencies statewide, Governor Jack Markell, Lt. Governor Matt Denn and Attorney General Beau Biden joined together to unveil a series of gun safety proposals to keep guns out of the hands of persons who should not possess them and make our communities safer.

Joined by Secretary of Safety and Homeland Security Lew Schiliro, and surrounded by members of the General Assembly, police officers, members of the faith-based community, and other advocates, the Governor, Lt. Governor and Attorney General announced that they intend to introduce five proposals to address gun safety issues in the wake of the tragic Sandy Hook Elementary School shooting in Newtown, Connecticut.  Today’s announcement coincided with the one-month anniversary of the tragedy in which 26 people (including 20 children) lost their lives in the second-deadliest school shooting in U.S. history.

“The gun safety measures we are proposing will strengthen our ability to keep guns out of the hands of those who should not have them,” said Governor Markell.  “I am pleased to stand together with Lt. Gov. Denn and Attorney General Biden to unveil these proposals. No one wants guns in the hands of people with ill intent. We must not arm those who would harm.  Instead, we must enact stronger laws to protect our communities. 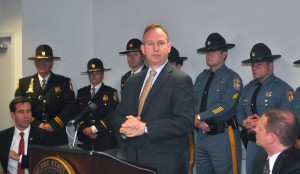 Reasonable gun safety laws, improvements to school safety and increased access to mental health treatment are three ways we can do better.  This package of gun safety measures is directed at individuals who might impose violence with a gun.”

“These proposals are part of a comprehensive approach to gun violence that includes improvements in our mental health system, improvements to school safety, and responsible oversight of guns,” said Lt. Gov. Denn. “With respect to guns, our proposals focus on two important goals: keeping guns away from dangerous people, and protecting victims from the weapons most likely to be used illegally.”

“The new laws we are proposing today will make Delaware a safer place to live, especially for our children,” said Biden, who has successfully sought to change state laws to increase prison terms for criminals who use guns when they commit crimes. “As a father, veteran and the state’s top law enforcement officer, I know that military-style assault weapons and high-capacity ammunition clips designed for battle have no place on our streets. These proposals are a reasonable and sensible approach that will improve public safety and respect the Second Amendment.” 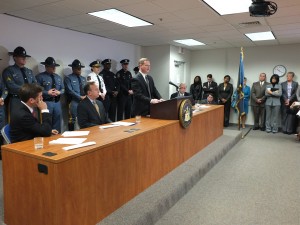 The proposals are as follows:

2.  Requiring the Reporting of Lost and Stolen Firearms:  There are two primary public safety benefits to requiring the reporting of lost and stolen firearms.  First, it discourages straw purchases and deters gun trafficking.  When a gun is found at a crime scene and later traced back to the original owner, the owner may falsely claim that a gun was lost or stolen in order to hide his involvement in trafficking or straw purchasing.  A mandatory reporting requirement provides law enforcement notice of suspicious patterns of behavior by persons who repeatedly fail to file reports yet claim that their guns were lost or stolen after the guns were recovered from a crime scene. And second, it helps prevent unwarranted criminal accusations against owners whose guns have been lost or stolen.  This bill would require individuals report a lost or stolen firearm within 48 hours of discovery.  Individuals would file a report with either the police agency having jurisdiction over the location where the loss or theft occurred, or any Delaware State Police Troop.

3. Banning the Sale, Manufacture, Delivery and Unlawful Possession of Large-Capacity Magazines: According to the Citizens Crime Commission of New York, 30 mass shootings (with four or more victims killed) occurred in the United States from 1982 through 2012.  Although the circumstances of such mass shootings varied, each incident had one thing in common: they all involved one or more large-capacity ammunition magazines.  This bill would prohibit the manufacture, sale, purchase, transfer or delivery of large-capacity magazines.  Large-capacity magazines are defined as magazines having the capacity to accept more than 10 rounds 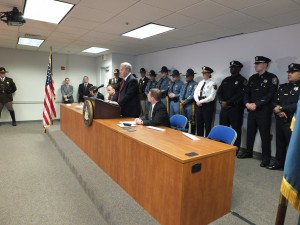 for any handgun and more than 5 rounds for any rifle or shotgun.  Acknowledging that thousands of law-abiding Delawareans currently possess large-capacity magazines lawfully, the bill would make such possession unlawful only if it occurs (1) in a public place (which would include highways, schools, parks, restaurants, bars, and similar locations), and (2) within 20 feet of a firearm capable of accepting such magazine.  The bill would exempt certain shooting ranges from the definition of “public place,” so that the possession and use of large-capacity magazines at such ranges would not be prohibited.

4.  Banning the Manufacture, Sale, Delivery and Unlawful Possession of Military Weapons: The sale of military-style assault weapons – firearms that are made for the battlefield and have no place in our communities – was outlawed in 1994, but the ban expired a decade later.  One such weapon – the Bushmaster AR-15 – was used in the Newtown shootings and also in the murders of two firefighters in Webster, NY, on Christmas Eve last year. This bill would prohibit the manufacture, sale and delivery of these military weapons, while allowing the continued possession and use under certain circumstances of weapons purchased prior to the effective date of the ban.

5.  Banning Possession of a Firearm Within 1,000 Feet of a School: This bill will help to ensure the safety of children in our schools.  By outlawing possession of a firearm in close proximity to school, we will enable law enforcement to interdict those individuals who knowingly possess firearms and do so in near school buildings and school yards. The purpose of this law is to create safe school zones, where children are secure, where parents can have peace of mind that upon leaving them in the morning, they will not be subjected to gun violence, and where teachers can go about their important task of educating our youth without fear of violence.  This is not intended to restrict the right of law abiding citizens to own guns.  Nor is it intended to restrict those law abiding citizens who reside near schools, as the law specifically exempts them from its prohibitions while the guns are on their property.  The law, likewise, is not intended to inhibit those individuals who possess concealed weapons permits from carrying firearms in conformity with the permits.

Photos from the press release are on the Governor’s Flickr page.