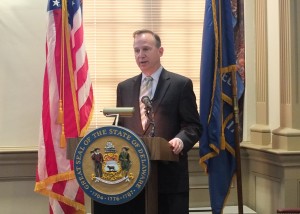 DOVER – Governor Jack Markell unveiled a balanced budget proposal that invests in jobs, education and the safety and well-being of our children. His budget keeps the focus on core commitments such as healthcare and public safety and ensures continued fiscal responsibility.

“We want to make sure we are growing jobs while ensuring the safety and well-being of our children,” Governor Markell said. “This budget addresses critical needs of the world we now live in, while considering demands that will be placed on us in the years ahead.”

The Governor expanded on a series of proposals from his State of the State aimed at ensuring Delaware’s children are fully supported within their communities and exposed to positive opportunities. Specifically, he recommended $3.3 million in funding to increase the number of trained, front-line mental health personnel in our middle schools – an area currently under-resourced, with just three of Delaware’s middle schools having full-time professionals responsible for the mental health needs of students. This budget would increase that number to 30.

“I am proposing a ten-fold increase in the availability of mental health professionals who can work with our middle school children to make sure that their issues are being diagnosed and referred to proper treatment,” said Governor Markell.

“Research tells us by investing in after-school and summer programs, we can improve academic performance, reduce dropout rates, improve self-esteem and prevent risky behaviors,” Governor Markell said. “By funding these initiatives, we address a critical gap in services for children and help ensure they are given the best chance at growing up to be healthy, successful, productive adults.”

The Governor proposes an allocation of $300,000 to accelerate development of school safety plans and $530,000 to hire six Delaware State Police Troopers to fight violent crime; $515,000 to the Department of Services for Children, Youth and Their Families to support youth aging out of foster care; and $93,000 to the Delaware National Guard for its Youth Challenge program, which helps 16-18 year old high school dropouts gain the values, life skills, education and self-discipline they need to succeed.

The budget proposal includes significant investments in public education, including $8.7 million for 110 new teacher units in schools, $8.5 million for step increases for school employees and $1.5 million to annualize salary increases for paraprofessionals. The recommended capital budget dedicates $99.0 million for construction projects in school districts throughout the state.

“Investing in education remains a guiding principle of our budgeting strategy,” said Governor Markell. “We must continue to strengthen our schools and prepare students to be in the workforce of tomorrow.”

The Governor also highlighted efforts by State agencies to govern responsibly through efficiencies and reductions.

“As the demands on state government increase and out year revenue forecasts decrease, we must remain fiscally responsible with taxpayer dollars,” said Office of Management and Budget Director Ann Visalli.

The Governor has proposed reducing personal income tax rates and other revisions to the series of revenue increases enacted in 2009 that are scheduled to sunset. These revisions are aimed at relieving the burden on small businesses and manufacturers while stabilizing the state’s revenue base for Fiscal Year 2014 and beyond.   If the current tax sunsets are allowed to take effect, the state could face a projected revenue shortfall of $266M in FY2015.  The governor’s proposal helps address that shortfall while reducing current tax rates on individuals and small businesses.

“The tax proposals are aimed at stabilizing our revenue situation this fiscal year while being mindful of the need to consider challenges we face beyond the upcoming fiscal year,” said Tom Cook, State Secretary of Finance.  “If we let taxes completely sunset, we will likely face a formidable fiscal problem in FY15.”

The specific proposals include:

§         For example, businesses in the service sector with annual receipts under $7.6 million pay less under the Governor’s proposal; and

A power point of the proposal is available online: http://budget.delaware.gov/fy2014/budget_presentation.pdf.

A supplemental document for the Capital Budget is also available online: http://budget.delaware.gov/fy2014/capital/cap_budget_supplement.pdf