DOVER – From early settlers to modern satellite systems, the history and future of Delaware agriculture are highlighted 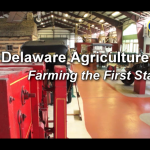 The 30-minute film, “Delaware Agriculture: Farming in the First State,” introduces viewers to the history of the state’s agricultural industry and the depth and breadth of modern-day farming. It features decades of historic photographs and new interviews with six Delaware farmers and footage of their apple orchards, grain farms, poultry operations and more.

“Farming in Delaware has a long and proud history, matched only by the strength and success of our farmers today,” said Secretary of Agriculture Ed Kee, an agricultural historian who narrates the film. “This documentary will help introduce Delaware residents to their farmers and neighbors next door, building awareness about the contributions and challenges of agriculture today.”

The film was created and produced by Wilmington-based TELEDUCTION and its nonprofit initiative, Hearts and Minds Film. The Delaware Farm Bureau and MidAtlantic Farm Credit also provided support.

It also highlights historic images from the Delaware Public Archives and footage from the Historic Lewes Farmers’ Market, the Delaware State Fair and the Delaware Agricultural Museum & Village.

“This film offers viewers a glimpse into the lands and lifestyles of farming operations unseen to those traversing the state on Del. 1,” said Director Sharon Baker. “It also offers a wealth of imagery and information from Delaware’s rich agricultural history.”

Initial funding for the film was provided by the Delaware Humanities Forum, a nonprofit educational grant-making organization that is the state affiliate of the National Endowment for the Humanities.

“We are impressed with TELEDUCTION’s sensitive portrayal of Delawareans telling their stories in their own words. In Delaware, farming is a significant part of the state’s identity,” said Marilyn P. Whittington, Delaware Humanities Forum executive director. “Ms. Baker is a good partner in this effort to celebrate and preserve Delaware’s industrial history.”

The film will be featured on WHYY-TV later this spring and shown at an upcoming series of public events through the Delaware Humanities Forum. The trailer is currently online at Content Delaware.