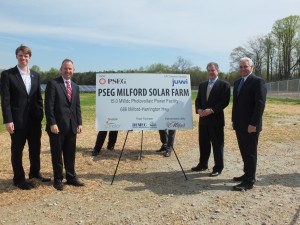 “The Milford Solar Farm helps point the way forward toward a sustainable future for all,” said Randall Mehrberg, president-PSEG Energy Holdings and executive vice president, strategy and development.  “This isn’t just any facility, but one that is important to an emerging green economy. Projects like this testify to the strong partnerships that have made solar energy a growing part of America’s energy mix, to the benefit of our nation’s energy security, economy and the environment.”

“The Milford Solar Farm is a great fit with Delaware’s commitment to a future of clean, renewable energy sources,” Governor Markell said. “The project’s far-reaching benefits began with the construction jobs it brought to the Milford area and will continue with many years of power production and economic benefits for the central part of our state.”

Collin O’Mara, Delaware’s Secretary of the Department of Natural Resources and Environmental Control, said that the project reflects Delaware’s growing national leadership in deploying a cleaner mix of energy sources.

“Now more than ever, it is critical that we adopt cleaner, cheaper and more secure local electrical generation that increases our competitiveness, reduces air pollution, improves public health, and creates jobs,” said Secretary O’Mara. “Through this important Milford project, DEMEC, PSEG, and JSI are helping to lead Delaware toward a clean energy future and demonstrating that we can have both a strong economy and a healthy environment.”

DEMEC will purchase the electricity generated by the solar farm through a 20-year power purchase agreement. 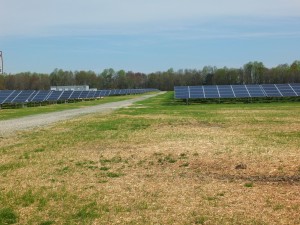 “This project again demonstrates that DEMEC and its municipal utility members are leaders in the deployment of solar generation resources in Delaware,” said DEMEC President and CEO Patrick E. McCullar. “Of the 43.8 megawatts of installed or committed solar generation resources in Delaware, a clear majority (26.5 megawatts, or 61 percent of the total) is installed in DEMEC municipal service territories. This becomes an even more striking statistic when you consider that DEMEC municipal service territories make up less than 15 percent of electric service in the entire state. DEMEC is committed to the continued deployment of economic renewable energy projects for the benefit of our communities.”

JSI acquired the partially-developed project from Sunolar in mid-2012, after which JSI, Sunolar, PSEG and the City of Milford worked together to get the project ready for construction. JSI served as the engineering, procurement and construction contractor and will manage the day-to-day operation of the plant. The $50 million project occupies 80 acres in Kent County. The construction of Milford Solar created approximately 100 jobs.

“The Milford Solar project is the fifth solar PV project we have built in the United States that has a nameplate capacity of more than 10 megawatts,” said Michael Martin, CEO of juwi solar, Inc. “Our site team worked tirelessly to build this project over a 90-day timeframe – including by celebrating Thanksgiving onsite and enduring the effects of Superstorm Sandy – in order to safely achieve commercial operation before the end of the year 2012.”

PSEG Solar Source owns four additional solar projects, all of which were built by JSI. A sixth solar project, the 19MW PSEG Badger 1 Solar Farm is currently under construction near Phoenix, Arizona.

• PSEG Jacksonville Solar Farm – a 15.0 MW DC solar farm on 100 acres in Jacksonville, Florida; at completion it was the second largest solar farm in Florida.

PSEG Solar Source is a subsidiary of Public Service Enterprise Group (PSEG) (NYSE:PEG), a publicly traded diversified energy company with annual revenues of more than $11 billion. Other subsidiaries include Public Service Electric and Gas Company (PSE&G), a regulated NJ gas and electric utility and PSEG Power, a merchant power generation company. PSEG has a total of 137 MWs of solar power in operation. PSEG Solar Source owns 67.2 MW of solar power with another 19.3 in construction. PSE&G is also active in solar energy.  It currently owns 75 MW of solar in New Jersey through its Solar 4 All™ program, consisting of 24 solar installations and more than 170,000 pole-attached solar units. For more information, visit www.pseg.com.