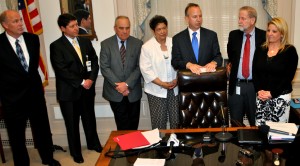 E)  Following the passage of House Bill 35 by the Delaware Senate by a 13-8 margin, Governor Jack Markell today thanked members of the General Assembly for their leadership in passing the most significant piece of gun safety legislation in Delaware in decades.

Under existing law, when a licensed dealer sells a firearm, he or she must perform a background check on the potential buyer. But when the sale does not involve a licensed dealer, no background check is required.  House Bill 35 closes this loophole by requiring background checks in connection with the sale or transfer of firearms between private parties.  The bill includes several exceptions, such as transfers to immediate family members, qualified law-enforcement officers and certain short-term transfers to persons personally known to the owner.

“For too many years, criminals and other ‘persons prohibited’ have been able to avoid background checks and exploit a loophole that allowed them to easily acquire firearms,” said Governor Markell.  By passing this legislation, we will close this loophole once and for all.  I want to thank the members of the General Assembly for passing this important legislation.  Delaware will be a safer place as a result of this bill.”

At least 6 times since 1990, the General Assembly has considered legislation to address the private sale loophole.  None of those bills ever made it to a floor vote.

“House Bill 35 is an important step toward ensuring that we minimize the number of gun tragedies in Delaware, by keeping guns out of the hands of people who we all agree should not have them. I am proud of the Senate – and the entire General Assembly – for passing this important piece of legislation,”  said Matt Denn, Lieutenant Governor.

“I want to congratulate the General Assembly for recognizing that background checks are an essential law enforcement tool that has stopped 2 million individuals nationally, primarily felons, individuals convicted of domestic violence crimes, and fugitives, from purchasing firearms since 1994,” said Attorney General Beau Biden, who worked on implementing the federal Brady background checks when he was a lawyer at the U.S. Department of Justice in the 1990s.  “Expanding background checks is critically important to protecting the safety of our children, our communities, and our state.”

House Majority Leader Representative Valerie Longhurst, who was the lead sponsor of the bill, agreed to numerous amendments to tighten the bill in response to concerns and ideas from Delaware gun owners. Despite those concessions and efforts at compromise, the NRA still opposed the bill and lobbied against it.

“We saw Congress earlier this week put a special interest group ahead of nearly 90 percent of the country. I want to thank all the representatives and senators who didn’t succumb to pressure and put public safety – and the support of nearly 90 percent of Delawareans – above the lobbying efforts of the NRA,” said Representative Valerie Longhurst, D-Delaware City. “Background checks have stopped thousands of persons prohibited from buy 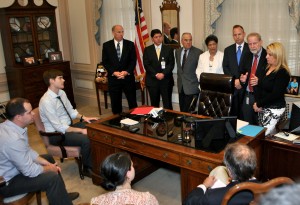 ing firearms at gun stores in Delaware.  This bill will close the loophole that allows those people to go to a private gun seller and buy a firearm and help keep guns out of the hands of people who should never have the chance to purchase them.”

“This is good, common sense legislation that has been a long time in the making,” said Senator Harris B. McDowell III, D-Wilmington North, the measure’s lead Senate sponsor. “I appreciate the leadership of the governor and of Representative Longhurst in being willing to step up, take on the gun lobby and prevail on an issue that ultimately makes Delaware a safer place.”

There have been 6 bills since 1990 to address the private gun sale loophole.  None of them even made it to a vote in either chamber of the General Assembly.

The bill was unveiled by the Governor during a news conference with former Congressman and Governor Mike Castle last month.   It passed the House in March by a vote of 24-17.

Video from the event is available online.