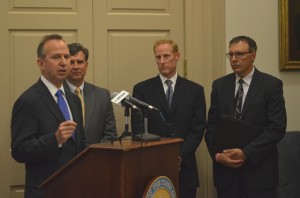 “Delaware is rightfully recognized worldwide for its leading role in corporate law,” said Governor Jack Markell. “With the addition of Public Benefit Corporations, Delaware will continue to be a leader and support a new movement of  social entrepreneurs and investors who are stepping forward to meet high standards of corporate purpose, accountability and transparency.”

Delaware is the legal home of more than one million legal entities including many of the nation’s largest businesses. The State’s recognition of this new type of corporation whose end objective is to create a positive impact on society and the environment is expected to have a significant effect on the development of this area of corporate law. The bill requires directors of a Delaware public benefit corporation to balance the interests of stockholders with the best interests of those materially affected by the corporation’s conduct and the specific public benefits identified by the corporation.

Senate Bill 47 was introduced today in the Delaware General Assembly with bi-partisan support.

“I am proud to sponsor legislation which gives corporations a way to rebuild public trust in business by ensuring that the benefits of their work extend beyond their stockholders and managers,” said Sen. David Sokola, D-Newark, who is sponsoring the bill.

Rep. Bryon Short, who chairs the House Small Business Caucus and the House Economic Development Committee, is the lead House sponsor of the legislation. “The establishment of benefit corporations is a positive step forward for the role of corporations in our communities,” said Rep. Short, D-Highland Woods. “Their missions go beyond the historical board-stockholder relationship to create specific public benefits. Delaware’s unique role in the corporate world makes us an ideal place for Benefit Corporations to incorporate. I’m happy to support this legislation and help guide it toward becoming law.”

B Lab, a non-profit organization whose mission is to use the power of business to solve social and environmental problems, is the nation’s leading advocate for benefit corporation legislation. B Lab also certifies hundreds of companies that meet rigorous standards of social and environmental performance, accountability and transparency including more than 70 firms that are already incorporated in Delaware. According to Jay Coen Gilbert, co-founder of B Lab, “Delaware’s introduction of benefit corporation legislation is a tipping point in the acceleration of a global movement to redefine success in business.  We are deeply appreciative of the commitment that Delaware had made to this important issue and thank Governor Markell, the bill’s sponsors, the Delaware State Bar Association, the Delaware Court of Chancery, and the Secretary of State for their leadership in supporting legislation that will work in Delaware.”

John Grossbauer, Vice Chair of the Council of the Corporation Law Section of the Delaware State Bar Association, stated “I’m pleased to represent the Delaware State Bar Association in endorsing this legislation which will provide corporations, entrepreneurs and investors who wish to pursue these goals the ability to rely on a long tradition of Delaware corporate law that provides both the stability and predictability that businesses have come to rely upon.”

If enacted, corporations would become eligible to form, convert or merge into a public benefit corporation beginning August 1, 2013.

Video from the event is available online.