Governor thanks law enforcement, advocates for their support and lawmakers for passing bill requiring background checks in connection with virtually all gun sales

House Bill 35, which goes into effect July 1,  closes a loophole in state law by requiring background checks in connection with the sale or transfer of firearms between private parties.  The bill includes several exceptions, 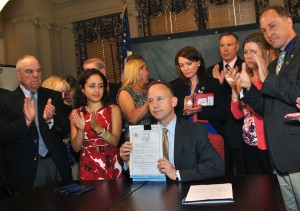 such as transfers to immediate family members, qualified law-enforcement officers and certain short-term transfers to persons personally known to the owner.

“Thanks to your hard work, your dedication, and your passion, today we are closing the private sale loophole once and for all,” said Delaware Governor Jack Markell. “No longer will we have 2 different markets for the sale of firearms – a regulated market for dealers, and an unregulated market for everyone else.  No longer will our laws draw a meaningless distinction between dealers and non-dealers when it comes to requiring background checks.  And no longer will we tolerate a system that too easily allows criminals to acquire guns and commit more crimes.   You made this happen – each and every one of you.”

At least 6 times since 1990, the General Assembly has considered legislation to address the private sale loophole.  None of those bills ever made it to a floor vote.  House Bill 35 was unveiled by the Gov. Markell, Lt. Gov. Denn, Attorney General Biden and former Congressman and Governor Mike Castle at a news conference in March.

“I said in January that we weren’t going to bury our heads in the sand and pretend that we could address gun violence without talking about guns.  And now we have taken a giant step in the right direction.  This is as basic as it gets: keep guns out of the hands of people who we have already agreed shouldn’t have them,” said Matt Denn, Lieutenant Governor.

“Expanding background checks will keep more guns away from criminals and others who should not have them,” Attorney General Beau Biden said.

“This is a change that’s been a long time coming,” said Senator Harris B. McDowell III, D-Wilmington North, who was an early leader in the move to require background checks in an effort to close the gun show loophole. “By passing this we’re not only making Delaware safer, we’re helping build the momentum that we all hope will spur Congress to what’s needed and act on this common sense measure at a national level.” 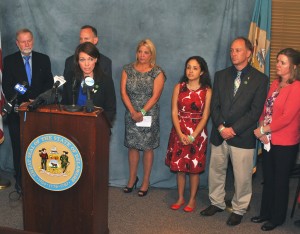 Nicole Hockley, mother of 6 year old Dylan who was murdered at Sandy Hook Elementary School in Newtown, Connecticut on December 14, 2012 was one of four Sandy Hook family members at the bill signing.  Hockley  and others traveled to Delaware to meet with state legislator to discuss ways to strengthen Delaware’s gun laws.

“I am committed to doing all I can to make sure no other parent or family has to go through what I had to go through, or other parents of Sandy Hook are going through or what nearly 4000 families are currently going through as a result of deaths from gun violence just since December 14th,” said Nicole Hockley.  “The legislation will spare Delaware families unimaginable heartache and will save lives without interfering with anyone’s second amendment constitutional rights.   I applaud Delaware for taking this important step forward.”

House Majority Leader Rep. Valerie Longhurst, who was the lead sponsor of the background checks bill, thanked the families from Newtown for attending and turning their personal tragedies into a force for positive change.

“Your presence reminds us why we took up this legislation in the first place. You remind us that after all the criticism – some constructive, some not so – it was well worth it, especially if we can help prevent future gun violence,” said Rep. Longhurst, D-Delaware City. “This background check bill is one step toward addressing gun violence in our society. The supporters of this legislation understand that one bill – or a dozen new laws – is not going to eliminate incidents like this. But to sit and do nothing, to make excuses and refuse to work together to find a common ground, is inexcusable. We are taking one small step forward today, and I hope that it is not our last.”

Persons who violate HB 35 will be guilty of a class A misdemeanor for a first offense.  Any subsequent offense is a class G felony.