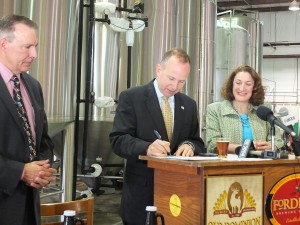 (Dover, DE) Flanked by liquor store and Delaware craft brewery owners at Fordham & Old Dominion Brewing companies in Dover, Governor Markell signed into law House Bill 31, which allows Delaware liquor stores to fill and sell growlers of draught beer on site. A growler is a glass or ceramic jug filled with draught beer, typically sold in a 64-ounce (half gallon) size. Until today, craft breweries can only sell growlers at their breweries or brewpub. Neighboring states Pennsylvania and New Jersey already allow liquor stores to sell growlers, while Maryland’s law is on county-by-county basis.

“While it’s nice to recognize American Craft Beer week, this bill is part of a larger effort to move Delaware small and medium-sized businesses forward,” said Governor Markell. “Until today, Delawareans who own craft breweries or liquor stores were at a disadvantage compared to their competitors across our borders. As a result of the efforts led by Representative Heffernan and Senator Sokola, these businesses can compete and expand on market opportunities, which is good for their bottom lines and good for our state’s overall economy.”

Breweries often produce draught beer varieties that are only available at their brewery or brewpub, which limits craft beer drinkers’ ability to purchase certain varieties. By allowing liquor stores to sell growlers, Rep. Debra Heffernan said that Delaware’s small craft breweries will be able to expand their market and reach more customers, while liquor stores will be able to compete with stores in neighboring states.

“It didn’t make sense to me that I could drive right over the Pennsylvania state line to buy a growler of Delaware-made craft beer but would have to drive the length of the state if I wanted to buy the same growler in Delaware,” said Representative Deb Heffernan, D-Brandywine Hundred South. “Craft beer drinkers enjoy the taste of these small-batch beers and love trying different varieties. This is an economic development bill that increases access to fresh, locally brewed beer across Delaware. By allowing Delaware liquor stores to sell growlers, we will be helping two industries increase sales and expand their customer base. It truly is an economic development win-win for everyone involved.”

According to the Brewers Association, craft brewers and brewpubs provide nearly 110,000 jobs in the U.S.   Delaware ranks 10th in the nation for capita per brewery with nine breweries operating throughout all three counties.  The craft beer industry exploded during the past 20 years, with the number of breweries operating in the U.S. mushrooming from about 300 in 1990 to more than 2,400 as of March, with 2,360 being defined as craft breweries, according to the Brewers Association.  The craft brewing industry grew 15 percent by volume and 17 percent by retail dollars in 2012, while overall beer sales in 2012 were up 0.9 percent by volume. The Delaware Brewers Guild estimates that state craft brewers produced about 250,000 barrels of beer last year.

“We are beyond excited about the passage of HB 31. Growlers are something our customers have been asking about for a while now and it is great to be able to fill that demand,” said Peco’s Liquor Store owner Ed Mulvihill. “Not only will this new law make beer lovers around the state happy, it will also give more exposure to our fantastic local brewers. A 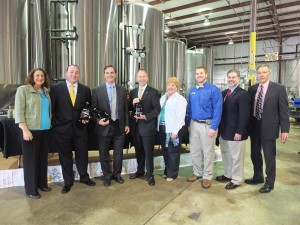 very special thank you to Rep. Debra Heffernan for all she has done in support of this bill. She realized the importance of this legislation to Delaware and worked tirelessly until it became a reality. I know that customer excitement is high for growlers and we will be up and running the moment the green light is given to us.”

“We are excited that the growlers will allow us to share draft-only beers, that had been previously only available to bars, with many of our loyal drinkers,” said Jim Lutz, president and CEO of Fordham & Dominion Brewing. “We appreciate the community that comes along with these. Not only do they connect us to beer history, they provide us a means of commemorating special occasions.”

Under House Bill 31, liquor stores will be able to purchase a growler filler permit for $150 every two years, allowing them to fill, cap and sell growlers to go.

“This is a change that just makes a lot of sense,” said Senator David Sokola, D-Newark, the bill lead sponsor in the Senate. “Delaware beer lovers shouldn’t have to go to Pennsylvania or Maryland to get a growler of their favorite Delaware brews refilled, and now they won’t have to do that. Our craft breweries are a growing industry and often set the standard for the rest of the industry, so I’m glad we were able to get this done to support our craft brewing community, both the brewers and the beer lovers who support them.”

Delaware Alcoholic Beverage Control Commissioner Jack Cordrey said he expects that his office will be able to start issuing growler filler permits within a week.

Photos from the event are available online.