“The Trial of William Penn”: Historical play to be presented at Dover, Del.’s Old State House on June 1, 2013 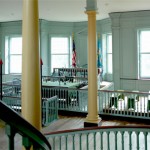 On Saturday, June 1, 2013 at 1 and 3 p.m., The Old State House, located at 25 The Green in Dover, DE 19901, will present “The Trial of William Penn,” a historical play about the future founder of Pennsylvania’s 1670 trial on charges of “fomenting an unlawful and tumultuous assembly” by preaching to a group of Quakers on a London street. Admission to the museum, which will also be open for tours between 9 a.m. and 4:30 p.m., is free and open to the public. For additional information, call 302-744-5055.

Adapted from “The Tryal of William Penn and William Mead” by Mary DeAngelis and Margo Gulati, the play depicts Penn’s prosecution and the jury that was imprisoned when they would not find him guilty as charged. Issues of religious freedom, the writ of habeas corpus and jury nullification are explored during the course of the 30-minute performance which features the audience serving as members of the jury. As English courts of old were far less civil than the courts in America today, audience members will be asked to join in on the court proceedings with the following cheers: “Hear him, hear him!,” “Let him speak!,” “Our brother speaks the truth!,” “Huzzah!,” and “God save the Magna Carta”; and the following jeers: “Tyranny!,” “Boo!,” “Hiss!,” “It’s unlawful” and “The curse of Cromwell be upon you”!

Completed in 1791, The Old State House is one of the oldest buildings of its kind in the nation. The first floor features an 18th-century-style courtroom that was originally designed for legal proceedings similar to those utilized in the trial of William Penn. The second floor features chambers for the state’s Senate and House of Representatives. The building is situated on Dover’s historic Green, a public area designated by William Penn in 1683 after his arrival in America.