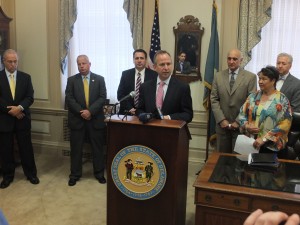 Schiliro, (Senate Bill 16) received strong support from law enforcement groups as an effective way to address straw purchasers – people who buy a weapon to give it to someone prohibited from having one.

“Finally, we have given our law enforcement officers a useful and practical tool to address a dangerous practice that has allowed firearms to get into the wrong hands,” said Markell. “Combined with our efforts to require background checks for private sales, we have made great strides this year toward making our communities safer.”

“Quickly reporting lost and stolen firearms helps the police keep those guns from ending up in the hands of criminals and other dangerous individuals,” Biden said. “This legislation will also help my office prosecute individuals who buy guns on behalf of criminals, only to claim they lost the weapon or it was stolen when that gun is used in a crime.”

“While 99% of all firearm owners take reasonable measures to prevent their guns from falling into the hands of children or persons who use them to commit a crime, this new law will protect those owners by making it easier for law enforcement to locate a lost or stolen weapon and return it to its owners. Timely reporting of gun thefts or losses enables police to trace guns more effectively and makes the successful prosecution of uses of stolen guns more likely,” Schiliro said. 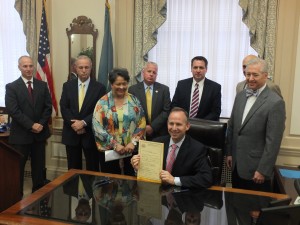 According to the Delaware Criminal Justice Information System, police have arrested more than 6,000 people in Delaware for illegal possession of a firearm since 2009. About half of the time the offenders acquire the weapon through a straw purchaser. Senate Bill 16 will require gun owners to report the loss or theft of their firearm to police within 7 days of discovering the weapon is missing.  Violators will be subject to a fine of $75-$100 for a first offense and a fine of $100-$250 for a second offense.  A third offense is a class G felony.

“This law shouldn’t trouble any law-abiding, responsible gun owner,” said Senate Majority Whip Margaret Rose Henry, D-Wilmington East, who sponsored the new law. “But we hope it help keep our streets safer by combating those so-called ‘straw purchasers’ who buy guns, often in quantity, sell them to criminals and then miraculously discover that they’re missing.”

Rep. Michael Barbieri, the bill’s House prime sponsor, noted that responsible gun owners will report a lost or stolen firearm immediately, much in the same way a person would report their car being lost or stolen right away in the hopes of having it returned.

“For the vast majority of law-abiding gun owners, this bill will have very little impact on their lives,” said Rep. Barbieri, D-Newark. “For those engaged in straw purchases, this bill helps law enforcement with police investigations and give them one additional tool to combat straw purchases. It is another small step toward keeping dangerous weapons out of the hands of those who should not have them.”