Sponsored by Senate Majority Leader David McBride along with Representatives Debra Heffernan and Trey Paradee, Senate Bill 117 makes Delaware a member of the Interstate Wildlife Violator Compact (IWVC). The 40 states involved in the compact share information about lawbreakers who have lost their hunting, fishing, and/or trapping privileges due to major offenses, such as poaching against wildlife or fisheries resources. Delaware will join this process and gain access to records from the 39 other members, allowing the state Department of Natural Resources and Environmental Control (DNREC) to deny licenses to those who have committed outrageous acts elsewhere. In addition, violators in Delaware will risk losing privileges in all of the other states.

Surrounded by advocates for hunting, fishing and animal rights at the Russell W. Peterson Urban Wildlife Refuge’s DuPont Environmental Education Center, Markell thanked members of the General Assembly for making the environment a major priority in the just-completed legislative session.

“The work done to bring Delaware into the Interstate Wildlife Violator Compact reflects a concerted and productive effort in this year’s General Assembly to protect our natural resources,” said Markell. “ 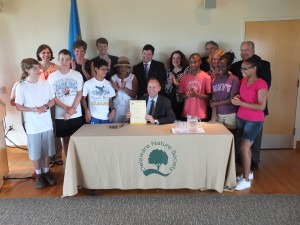 Today, we affirm that opportunities to hunt and fish as well as to simply enjoy the beauty of our environment are all important parts of making Delaware an attractive and welcoming place for everyone.”

“We don’t want people who have shown a disregard for hunting and fishing laws doing the same thing here and threatening our wildlife , but right now, there isn’t a way for a Delaware vendor to know whether someone from out of state has a record that would deny them a license,” said Sen. McBride, D-Hawks Nest, a longtime champion of environmental causes. “With this information at the fingertips of the people who we’ve empowered to issue licenses, we’re taking a big step to keep that from happening.”

Markell commended community leaders, such as Delaware Nature Society Environmental Advocate Brenna Goggin, for bringing together diverse groups to build a strong coalition of support for the bill. Hunting advocates, such as members of Quality Deer Management and Ducks Unlimited, joined animal rights advocates from organizations like the Humane Society in recognizing an opportunity to put aside differences for the benefit of hunters, fishermen, wildlife and the quality of life in Delaware.

Rep. Heffernan, who chairs the House Natural Resources Committee, said the bill provided an unusual instance in which environmental groups and sportsmen came together on an issue.

“Environmental groups and sportsmen both supported this new law to keep people who violate wildlife laws in other states from being able to get licenses here in Delaware,” said Rep. Heffernan, D-Brandywine Hundred South. “Both groups have a vested interest in preventing poachers and other lawbreakers from coming to Delaware and continuing their illegal practices. I’m proud to see Delaware join this compact.”

An avid hunter and Ducks Unlimited member, Rep. Paradee said the new law would help weed out “troublemakers” who break laws, over-hunt or over-fish. SB 117 would help make sure game are being taken according to the law.

“I have friends who signed on to a hunting trip with a professional outfitter who it turns out was kicked out of several other states for breaking their laws. The outfitter just went from state to state, breaking laws,” said Rep. Paradee, D-West Dover. “By having this law in place, we’ll be able to catch people like this. Hunters love this type of law because it keeps the bad elements out of Delaware and it’s good for wildlife.”

Other laws Governor Markell has signed in 2013 to protect Delaware’s natural resources:

House Bill 95 gives DNREC the authority to hold accountable people who contaminate our land and water and leave it to the state to clean up their mess. DNREC can now impose environmental liens on property owners to recover taxpayers’ money expended by the State on cleanup costs.

House Bill 32 eliminates a 36-year-old monetary cap on liability for oil spills. It aligns Delaware with other states that have no liability limits and ensures the owners and operators of oil vessels and facilities know they, not Delaware citizens, will be held fully responsible for not taking necessary precautions.

House Bill 41 builds upon strong existing state regulations and prohibits the sale and distribution of shark fins, showing the state’s commitment to ending the cruel practice of shark finning.

Senate Bill 65 consolidates clean water infrastructure financing responsibilities under one Water Infrastructure Advisory Council to make it easier for the state to take a comprehensive approach to keeping our drinking water safe and enhancing our wastewater and storm water systems.