(Wilmington, DE)  Governor Jack Markell today joined legislators, entrepreneurs and investors to sign legislation (Senate Bill 47) enabling the formation of public benefit corporations in Delaware.  Public benefit corporations (“PBC’s”) are a new kind of socially conscious for-profit corporation intended to operate in a responsible and sustainable manner.  Their affairs are to be conducted for the benefit not only of stockholders, but also for public interest and those affected by the corporation’s activities. The creation of PBC’s in Delaware is a significant addition to the state’s long- standing leadership in the development of corporate law worldwide.

“We’ve all heard about corporations wanting to ‘do well’ while also ‘doing good.’  With this new law, Delaware corporations will now have the ability to build those dual purposes i 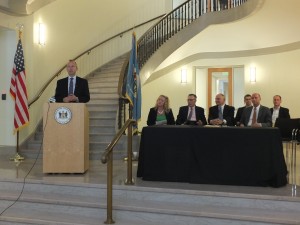 nto their governing documents,” said Governor Jack Markell.  “ We have heard repeatedly that public benefit corporations can fill a market need.  But just as important, they will also fill a societal need.”

Delaware is the legal home of more than one million legal entities, including many of the nation’s largest businesses. The State’s recognition of this new type of corporation whose end objective is to create a positive impact on society and the environment is expected to have a significant effect on the development of this area of corporate law. The law requires directors of a Delaware public benefit corporation to balance the interests of stockholders with the best interests of those materially affected by the corporation’s conduct and the specific public benefits identified by the corporation.

“This law will provide benefit corporations with the stability, efficiency and predictability that are the hallmarks of Delaware corporate law,” said Secretary of State Jeffrey W. Bullock who oversees the state’s Division of Corporations.  “Our Courts, our corporate and legal services industry, and my staff look forward to providing the high-quality infrastructure and support that managers and investors have come to expect from Delaware.”

This new corporate structure helps businesses combat short-termism, attract talent and customers, and accelerate the growth of a big investment opportunity to meet the needs of people who want to both make money and make a difference.  The legislation, Senate Bill 47, passed the Delaware General Assembly without a vote in opposition.

“I’m proud that Delaware now has a corporate vehicle to offer business leaders and investors that want to create value that extends well beyond owners and managers to society and the public as a whole,” said Sen. David Sokola (D-Newark), who was the prime sponsor of the bill in the Senate.

“I’m happy to have co-sponsored this law which because of our State’s unique role in Corporate America will make benefit corporations a viable option for entrepreneurs and investors in Delaware and throughout the nation,” said Rep. Byron Short (D-Highland Woods) who chairs the House Economic Development Committee.

B Lab, a non-profit organization whose mission is to use the power of business to solve social and environmental problems, is the nation’s leading advocate for benefit corporation legislation. B Lab also certifies hundreds of companies that meet rigorous standards of social and environmental performance, accountability and transparency including more than 70 firms that are already incorporated in Delaware. According to Jay Coen Gilbert, co-founder of B Lab, “Delaware’s enactment of benefit corporation legislation helps business return to its proper role in society to create shared and durable prosperity. We’re deeply appreciative of Governor Markell’s leadership and the strong support of the Delaware General Assembly, the State Bar Association, the Court of Chancery, and the Secretary of State in creating a clear path to scale business as a force for good.”

Formation of a Public Benefit Corporation

A public benefit corporation (PBC) will be formed in the same manner as any other corporation formed under the Delaware General Corporation Law. However, in order to be a PBC, the corporation’s certificate of incorporation must identify one or more specific public benefits and must have a name that clearly identifies its status as a PBC. Public benefits for which corporations may be formed include, but are not limited to, those of an artistic, charitable, cultural, economic, educational, environmental, literary, medical, religious, scientific or technical nature. 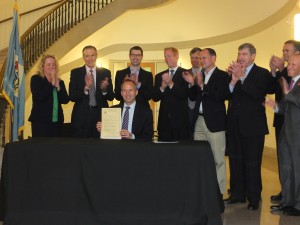 Norm Monhait, Chair of the Council of the Corporation Law Section of the Delaware State Bar Association, stated “We believe this law provides the best available vehicle for broad public investment in benefit corporations.  Members of the Delaware Bar stand ready to assist B Corp managers and investors who want to better understand this legislation and use it to reach their goals.”

Following the bill signing ceremony, Governor Markell joined dozens of CEO’s, investment and venture capital firms and legal experts at a program on benefit corporations hosted by the World Economic Forum in New York City.  The event offered the first opportunity for the State to promote the advantages Delaware has to offer benefit corporations.   Governor Markell was joined at World Economic Forum by Delaware’s Chancellor Leo Strine and Delaware corporate attorney Rick Alexander.

Corporations are eligible to form, convert or merge into a public benefit corporation in Delaware beginning August 1, 2013.