DELAWARE CITY (July 31, 2013) – Fort Delaware State Park will offer a special museum theatre program debuting on Saturday, Aug. 3 at 2:45 p.m., and on every weekend after that through Labor Day.

“Swallowing the Yellow Dog” presents the story of two Confederate prisoners mulling over one’s decision to sign the oath of allegiance to the United States. The presentation, written by Dale Jones of Making History Connections, was created using primary research information on prisoner life at the fort.

Ferry reservations are suggested, but visitors may purchase tickets on the day of the program on a first-come, first-served basis. Reservations may be made by calling 1-877- 987-2757 or visiting destateparks.com. Tickets may only be reserved 24 hours in advance.

“Recidivism in Delaware: An Analysis of Prisoners Released in 2008 and 2009”

(Wilmington, DE)   Below is the Governor’s statement regarding the report and news release issued today by the Delaware Criminal Justice Council Statistical Analysis Center, entitled, “Recidivism in Delaware: An Analysis of Prisoners Released in 2008 and 2009.”

“This report, and the valuable data it provides, is an integral part of our Justice Reinvestment Initiative.  Too many people released from our prisons go on to commit more crimes.  We need to change that, and this report gives us benchmarks for measuring progress as we pursue new strategies to prevent crime and reduce recidivism.  The data released today can help us measure the effectiveness of programs, both in and outside of prison, targeted to helping offenders become productive members of society while improving public safety,” said Governor Jack Markell.

Last year, Governor Markell signed into law recommendations by the Justice Reinvestment Task Force, which he created in July 2011 through Executive Order Number 27.  The law mandated an annual report on recidivism rates.

Joshua Meier will present an exhibition titled [Un]Remembering, in the Delaware Division of the Arts Mezzanine Gallery from August 2-30, 2013. The Gallery, open weekdays from 8 a.m. to 4:30 p.m., is located in the Carvel State Office Building, 820 N. French Street, Wilmington. There will be a reception to meet the artist on Friday, August 2 from 5-8 p.m. as part of Wilmington’s Art Loop.

This solo exhibition of Joshua Meier’s work will showcase a series of images related to memory. [Un]Remembering is about the process of selecting which experiences we choose to remember and those we choose to forget—in other words, the editing of memories. In this way, the act of forgetting takes on a more active role as we decide what to hold on to and what to let go; the memories we wish to keep intact and those we attempt to recreate.

Joshua Meier has exhibited his work nationally and this is his first exhibition in Wilmington. The artist received his MFA from the University of Tulsa and is currently the Head of Photography at St. Andrew’s School, Middletown, DE.

DOVER, Del. – The Delaware Office of Highway Safety and Dover International Speedway have announced a new partnership that will see the state office become the title sponsor for the newly branded “Drive Sober 150” NASCAR K&N Pro Series East race, which takes the green flag at 4:45 p.m. on Friday, Sept. 27.

Throughout the Sept. 27-29, 2013 race weekend at the Monster Mile, the Delaware Office of Highway Safety (OHS) will promote traffic safety, with a special focus on the dangers of impaired driving and the importance of not getting behind the wheel while under the influence.

“This fall we are excited to expand our Drive Sober campaign with the sponsorship of the NASCAR K&N Pro Series East race,” said Jana Simpler, director for the Office of Highway Safety. “Our partnerships with Dover International Speedway and NASCAR teams have helped to share our messaging with a dynamic audience we otherwise could not have reached on our own. We are thankful for the partnerships and support we receive from the Speedway and the racing community.”

The OHS presence isn’t a new one at the Speedway, as it has been a track partner with a large interactive exhibit in the track’s FanZone on race weekend, promoting everything from the importance of buckling your seat belt to driving sober. Planned activities at the race this year include driver autograph sessions, a Designated Driver tent, games using fatal vision goggles and much more.

The Delaware Office of Highway Safety has also previously served as the primary sponsor on J.J. Yeley’s No. 36 Tommy Baldwin Racing (TBR) Chevrolet, and will continue to partner with TBR in the “AAA 400” NASCAR Sprint Cup Series race on Sept. 29. OHS is also expanding its partnerships to include primary sponsorship of Ben Kennedy in the No. 96 Ben Kennedy Racing Chevrolet for the “Drive Sober 150” NASCAR K&N Pro East Series race, and Regan Smith in the No. 7 JR Motorsports Chevrolet for the Sept. 28 NASCAR Nationwide Series race.

“We’re thrilled to have the Delaware Office of Highway Safety promoting this very important message throughout race weekend,” said Michael Tatoian, executive vice president and COO of Dover Motorsports, Inc. “The Office of Highway Safety does so much great work in our state to make our roadways safer, and the ‘Drive Sober 150’ gives them the chance to spread that message on a national level too.”

For tickets or more information, call 800-441-RACE or visit DoverSpeedway.com. You can also keep up with the Monster Mile at Facebook.com/DoverInternationalSpeedway or on Twitter at @MonsterMile.  Follow OHS on Twitter @DEHighwaySafe or on Facebook.com/ArriveAliveDE.

Biden, staff help give back to disabled Veteran at Sussex County Habitat for Humanity Build Day

Georgetown, DE – Attorney General Beau Biden joined a group of two dozen staff and family members from the Attorney General’s Office Saturday, July 27th to roll up their sleeves and show their support for Sussex County Habitat for Humanity’s Veteran Build Home in Georgetown Point.  The home is being built and funded by local Veterans and Veterans groups for Mari Ellyn Hellard, a disabled US Air Force Veteran and her two sons Joseph and Joshua.  As a member of the Army National Guard who was deployed to Iraq with the First State’s 261st Signal Brigade, Biden worked a shift alongside other volunteers to put down flooring to prepare for upcoming tile work and installing vinyl siding. 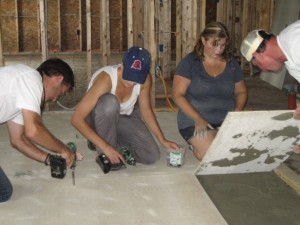 “Our staff and I were privileged to spend some time this weekend with Mari Ellyn and her family and to lend a hand to the construction of their beautiful new home,” Biden said.  “I want to thank Habitat for Humanity and our dedicated veteran’s organizations for their commitment to her and for meeting the needs of so many other members of our community.” 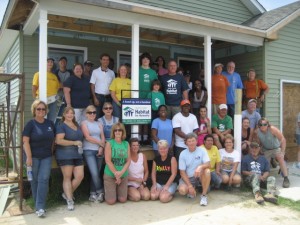 As the volunteers gathered together Saturday for a photo with the Hellard family, Tom Protack, Community Engagement Director for Sussex County Habitat for Humanity, shared Habitat’s Mission, “Today we are putting God’s love into action by bringing people together to build homes, communities, and hope.  Your presence today and willingness to lift a hammer to help gives Mari Ellyn and other Habitat Partner Families the hope they need to have better lives with a simple, decent and affordable home.”  Biden added, “We’re sending a clear message to service men and women around the world, those on active duty and those retired, that our nation honors their sacrifice and they are a vital part of our community.” 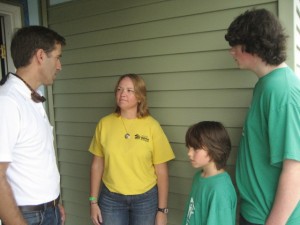 Attorney General Beau Biden with Mari Ellyn Hellard and her two sons Joseph and Joshua
Biden was joined on Saturday by his wife and two children, including his daughter, Natalie, who presented a bracelet she made to Mari Ellyn. As part of a Habitat tradition, Biden family members signed the studs of the walls and wrote messages of thanks and support to the Hellard family that will be there forever.

If you would like to participate in Sussex County Habitat for Humanity’s work by donating, volunteering or participating in future events surrounding the Veteran Build Project, contact Habitat at 302-855-1153 or visit www.sussexcountyhabitat.org.