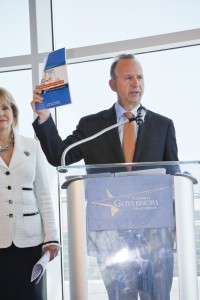 Blueprint is result of his year-long initiative as NGA Chair

Milwaukee, WI – At today’s opening session for the annual meeting of the National Governors Association (NGA), Governor Jack Markell released a blueprint of findings and recommendations compiled during a year-long project he led as NGA chair to increase hiring of people with disabilities. The document provides a roadmap for states, businesses and the disabilities community to work together on ways to address a persistent challenge and take advantage of the valuable skills possessed by this population.

Markell chose the topic realizing governors might be missing a unique opportunity to help businesses with their workforce concerns in a way that would generate broad bipartisan support. Of the estimated 54 million Americans living with a disability, only 20 percent are employed or seeking employment, compared to almost 70 percent of Americans without a disability.

“As governors, we know that when barriers prevent a significant segment of our population from participating in our workforce, talent is being wasted and our economic competitiveness suffers,” said Markell. “Businesses that are leading in hiring people with disabilities understand this effort isn’t about charity. As the CEO of Walgreens told us, he wants to have 25 percent of the company’s workforce consist of people with disabilities because it’s better for his bottom line and in the best interest of his shareholders.”

Markell’s initiative, “A Better Bottom Line: Employing People with Disabilities,” involved gathering information from people with disabilities, other advocates, business leaders, federal agency representative, state policymakers and researchers. The NGA organized more than 60 meetings, as well as two roundtables, two sessions at the NGA Winter Meetings in Washington, D.C., and institutes in Pittsburgh and Seattle where people across the country gathered to learn and discuss best practices.

In presenting the blueprint to fellow governors, Markell said discussions with businesspeople throughout the initiative affirmed they care about an employee’s ability, not his or her disability. Instead of looking to businesses to solve a social service problem, Markell said states must approach companies by offering to help solve the challenges they face in finding and hiring skilled workers.

In addition, businesses are much more likely to buy-in to the benefits of employing people with disabilities when they know a peer in the private sector is doing so. Governors must bring business leaders together to talk about this topic and provide an opportunity for them to learn from each other.

Markell referenced a partnership being launched in Delaware that illustrates the potential for putting more people with disabilities to work.  The state has helped bring together the IT firm CAI and an international organization called Specialisterne, which is dedicated to employment of individuals with autism. CAI, a company that employs thousands of people across the country, is committed to hiring people who have autism for more than 3% of its workforce by 2015, recognizing that these individuals are especially qualified for technology roles like software testing, data quality assurance, programming, data mining and data entry.

The NGA blueprint provides options for states to align their policies, programs and services for individuals with disabilities in gaining enhanced access into the workforce, including executable ideas to:

“We intentionally wrote this document as a ‘blueprint’ to map out practical actions governors can take, not as a report that will sit on a shelf,” said Markell. “It includes concrete examples for state policymakers as they work to advance employment opportunities for people with disabilities, which is a goal that every governor can support.”