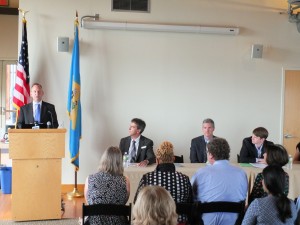 As a low-lying coastal state, Delaware has the lowest average land elevation in the United States and a significant population living along 381 miles of shoreline vulnerable to coastal erosion, storm surge, flooding, saltwater intrusion and tidal wetland losses, all of which will be exacerbated by sea-level rise.

“Our economy will be stronger and our communities more vibrant, if we take strategic actions today that will prepare us for the future,” said Governor Jack Markell.  “Despite existing programs and initiatives, the state continues to experience very real and wide-ranging impacts from flooding that are aggravated by more intense storms and rising sea levels.”

The Governor noted that over the past few years, Delaware has seen:

Benjamin Franklin’s old adage that an ounce of prevention is worth a pound of cure applies more now than ever before,” said Collin O’Mara, Secretary of the Delaware Department of Natural Resources and Environmental Control.  “The actions that Delaware takes today under Governor Markell’s leadership will reduce Delaware vulnerabilities to extreme storms and sea-level rise and will prevent hundreds of millions of dollars in future damages buy improving the resiliency of our economy, local communities, and natural resources.”

“The science is clear: Human activities are significantly contributing to climate change and accelerated sea level rise – and we must take action,” said Governor Markell.  “Improving Delaware resiliency is not simply an environmental issue – it is essential to supporting a thriving economy and protecting the health and safety of our residents.  It’s going to take the cooperation and participation of businesses, citizens, county and municipal governments as well as regional and federal entities to improve Delaware’s resiliency and serve as a model for others to replicate.”

Starting in 2010, Delaware’s 24-member Sea Level Rise Advisory Committee researched the effects that sea level rise could have on Delaware communities and in 2013, provided a list of recommendations to Secretary of the Department of Natural Resources and Environmental Control.

It should be noted that Delaware has made progress in reducing emissions and becoming more resilient to weather event by:

The  responsibilities of the Governor’s Committee on Climate and Resiliency include the following: