“the new face of manufacturing in Delaware” 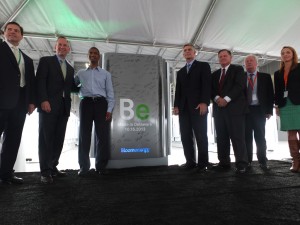 (Newark, DE) –  Bloom Energy officially celebrated its new manufacturing center in Newark and says it will be hiring more than 100 new workers in the coming months in jobs ranging from welders to production control technicians to electric/electronic engineers.   Bloom Boxes use revolutionary solid oxide fuel cell technology that converts fuel to electricity using an electrochemical reaction, rather than combustion, allowing customers to reduce their carbon footprint while cutting operating costs.  At today’s event, JPMorgan Chase announced it will be Bloom’s newest commercial customer in Delaware.

“This is the new face of manufacturing, and we have it right here in Delaware “ said Governor Jack Markell, who spoke about traveling to Bloom’s California headquarters in 2010 to talk with company leaders about expanding to Delaware.  “The growth of innovative companies like Bloom and of new, high-tech manufacturing is necessary to move Delaware’s economy forward.  We know one of the major reasons Bloom chose Delaware is our outstanding workforce.  We are committed to supporting and developing a pool of talented workers prepared for jobs in new manufacturing.  I am confident the company will continue to discover the great talents we have in Delaware and partners in the community that support Bloom’s continued growth here.”

JPMorgan Chase announced that it will soon pilot an 500 kW installation of Bloom boxes powering its Morgan Christiana site that will support power to its data centers.

“The fact that Bloom is opening this additional manufacturing plant in Delaware gives us easy access to maintenance and monitoring engineers at our Morgan Christiana site.  We hope to expand the pilot as we move forward,” said Bill McHenry, global head of Property Operation, who spoke at the official opening. “We are able to not only improve our facility right here in Delaware, but also fulfill our companywide commitment to investing in new technologies designed to reduce our impact on the planet.”

“Bloom has the best technology when it comes to converting fuel to electricity,” said K.R. Sridhar, C-E-O of Bloom.  “We have a tremendous following with our customers who want affordability, predictability when it comes to costs , reliability, security, and sustainability.  Using less fuel is the pathway to efficiency.”

Sridhar talked about Bloom’s commitment to Delaware saying, “We have built a factory; we are creating jobs and  we are putting cleaner energy in the s 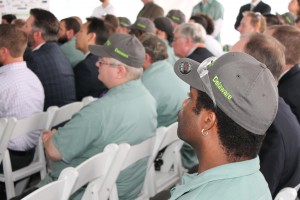 tate.  Our commitment continues.   Good partnerships are about trust and we will continue our commitment.”

University of Delaware President Patrick Harker said, “This is a milestone moment for us in terms of sponsoring innovation.  Bloom saw the potential of this campus early on.  They understood the advantages of proximity to UD: the creative energy of a lot of great minds working together; the efficiency that expedites time-to-market for important discoveries; the synergy of centralizing high-quality R&D education and training, technology development and manufacturing so that each can inform and improve the other.”

Bloom announced its plans to build its new, high-tech manufacturing center in Delaware in 2011 and broke ground on its facility in Newark in April 2012 which is located on the site of the former Chrysler plant in Newark.

Bloom’s customers include WalMart, which endorsed its growing partnership with Bloom during today’s event, as well as Google, Apple,  Bank of America, FedEx, Co a-Cola, Staples, A-t-and-T, Verizon and E-Bay.  Walmart first installed Bloom systems in 2009 and is one of Bloom’s largest customers.

Bloom began shipping Bloom boxes from the Center this summer and currently has approximately 80 people working at the new manufacturing center and has more than 70 jobs posted for immediate hiring.