Lecture/tours of the hull of the DeBraak, a shipwrecked 18th-century British warship, to return to Lewes, Del. beginning on June 2, 2014

After a highly successful second season in 2013 which saw attendance increase by 38 percent, the Delaware Division of Historical and Cultural Affairs will again offer public lecture/tours of the hull of His Majesty’s Sloop DeBraak, a British warship that was escorting and protecting a convoy of British and American merchant ships en route to the United States when it was capsized and lost off the Delaware coast on May 25, 1798. Lecture/tours will take place at 10 a.m. and 1 p.m. on the following Mondays during 2014: June 2, 9, 23 and 30; July 7, 14, 21 and 28; Aug. 4, 11, 18 and 25; and Sept. 8, 15, 22 and 29. Note: Tours will not be conducted on June 16 and Sept. 1. 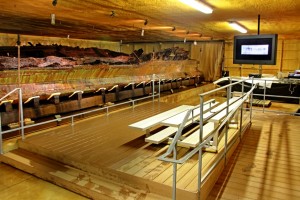 All programs begin at the Zwaanendael Museum, located at 102 Kings Highway in Lewes, Del., where a lecture on the ship will be presented in conjunction with the exhibit “A Seaborne Citizenry: The DeBraak and Its Atlantic World.” The exhibit tells the story of the vessel, its crew and the historical context within which it operated in the late 18th century. Ticket holders will then be transported, via van, to the DeBraak hull facility in nearby Cape Henlopen State Park for a tour of the surviving section of the ship’s hull. 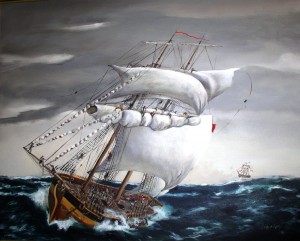 Available through the Shop Delaware website, nonrefundable tickets for the lecture/tours are $10 per person (restricted to persons aged 10 and above) with a limit of 12 visitors per program. Due to the limited number of seats that are available for each lecture/tour, ticket purchases are encouraged well in advance. For additional information, call 302-645-1148.

During the late-18th and early-19th centuries, sloops of war such as DeBraak played an increasingly important role in Royal Navy campaigns. These relatively small vessels combined speed, agility, shallow draft and increased firepower, all of which made them formidable naval vessels. As the only Royal Navy sloop of war from this time period that has been recovered anywhere in the world, DeBraak serves as an invaluable historical resource for a time when Britannia ruled the waves and the United States was just beginning to develop its sea legs.

The surviving section of the DeBraak’s hull and its associated artifact collection have been curated by the Division of Historical and Cultural Affairs since they were acquired by the state of Delaware in 1992. Approximately one-third of the hull survives including the keel, keelson and framing elements of the lower hull, and a large section of the starboard (right) side.