Delaware police officers are writing tickets to save lives.

Dover –  The Click It or Ticket campaign will be in full effect with statewide overtime seat belt enforcement starting Monday, May 12th through 26th.  Enforcement includes seat belt checkpoints in Dover and Wilmington and 446 saturation patrols to be conducted day & night by 35 state, local, and municipal police agencies statewide. Much of the enforcement will occur in the afternoons and evenings when the majority of unrestrained injuries and fatal crashes occur.

Delaware law requires drivers and all passengers, including those in the back seat, to wear a seat belt.  An officer can pull over a driver if he sees any person in the vehicle not wearing a seat belt, even if there is no other violation.  Officers will be issuing citations for seat belt violations as part of a zero tolerance policy.  The ticket, which goes to the driver no matter who is unbuckled in the vehicle, totals $83.50.

Delaware law enforcement will also be participating in a one day seat belt border to border enforcement blitz on May 19th.  The Border to Border initiative will be kicked off at 10:30 a.m with a joint press event at the Delaware Memorial Bridge Veterans Memorial Park with law enforcement from Pennsylvania, Maryland, New Jersey, and Delaware.  Law enforcement agencies along the east coast are teaming up to provide increased seat belt enforcement at border sites, sending a ‘zero tolerance’ message to the public: Driving or riding unbuckled will result in a ticket, no matter what State.

“As we kick-off  the busy summer driving season it’s important that everyone buckles up every time they go out, both day and night – no excuses,” said Jana Simpler, Director for the Office of Highway Safety. “Delaware law enforcement officers are prepared to ticket anyone who is not wearing their seat belt – Click It or Ticket.” 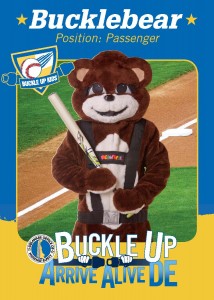 league organizations throughout the summer to bring the seat belt message to parents and kids during the games with activities including a fast pitch game, mascot appearances by Wilmington Blue Rocks “Rocky”, the Shorebirds mascot “Sherman”, and OHS very own Bucklebear.  Each mascot will be handing out custom Buckle Up baseball cards to kids to teach them about seat belt safety.  OHS will also be sponsoring the May 31st NASCAR Nationwide Series race- Buckle Up 200 presented by Click It or Ticket.

High School seat belt checks will be conducted at several high schools by the student resource officers along with student groups.  They are handing out Smarties candy and dum-dum lollipops along with good and bad ‘tickets’ to occupants in the car depending on who is buckled up or not.

Seat belts save lives. Get the facts: