Magnolia, DE – The second annual review of Governor Jack Markell’s world language immersion initiative, which seeks to give Delaware students an advantage in the global economy by ensuring their proficiency in a second language, reported continued growth, with about 1500 students expected to participate in 11 programs next school year. About 825 students currently participate, spending half of their school day learning subjects in either Spanish or Mandarin Chinese. In surveys taken during this schools year, nearly all of the students’ parents said their child enjoys learning the language and agreed that the program has enriched their child’s education.

Today, the Governor addressed the results of the first two years of the effort at an event at McIlvaine Early Childhood Center, which has offered Chinese the past two years and will add Spanish beginning in the fall. The Governor announced that the Brandywine and Appoquinimink School Districts have also committed to establishing immersion programs starting the following year.

“We do our children a great disservice if we don’t recognize the advantages of speaking multiple languages in a global economy,” said Markell. “It’s exciting to see that language immersion has generated excitement among parents, teachers, and, most importantly, our students. Their response gives us even more motivation to continue to maximize language-learning opportunities in our state.” 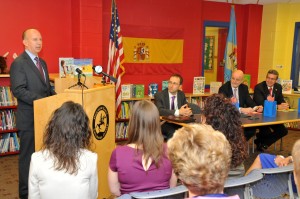 Underscoring the importance of attracting high quality teachers to make the initiative successful, he was joined by Spain’s Ambassador to the United States, Ramón Gil-Casares, as well as Spain’s Counselor of Education for the United States and Canada, Xavier Gisbert, who traveled to Delaware to sign a renewed Memorandum of Understanding (MOU) with the Delaware Department of Education – an agreement that has allowed teachers from Spain to work in Delaware schools.

The immersion initiative has used visiting teachers from Spain and China to help foster authentic language-learning environments. Fourteen of these instructors will be teaching in Delaware immersion programs next school year. They are educators with extensive experience in language instruction, who learn from each other and their English-speaking counterparts.

Since the world language initiative started in 2012, dozens of educators from Spain have taught in Delaware schools, enhancing the immersion program as well as contributing in other roles in schools with high Spanish-speaking/English Language Learner populations.

The MOU allows Delaware to participate in a Visiting Teachers Program. When a school or district has difficulty finding highly qualified Spanish teachers, or when they would like to enrich their existing faculty with a native teacher from Spain, they can apply to have a teacher from Spain join their staff. The Spanish teachers go through several rounds of application and screening, as well as an interview by the Delaware Department of Education. Selected educators come to Delaware as part of a “cultural exchange” and can remain for up to three years. Through the MOU, Delaware schools also have the opportunity to send teachers to immersive training programs in Spain.

In addition to the official MOU signed by Gisbert and Delaware Education Secretary Mark Murphy, the Governor and Ambassador signed a tribute reaffirming the education partnership.

“Today’s visit by our friends from Spain demonstrates the strength of the relationship we have established,” said Markell. “I’m grateful to the Ambassador, the Counselor of Education, and the leadership in their country for recognizing the benefits of this partnership for everyone – including students, parents, and citizens in both of our countries.”

In 2012-13, 340 Delaware students in either kindergarten or first grade began the immersion process in four programs: two in Mandarin Chinese and two in Spanish. While almost every one of those students continued immersion in first grade, about 500 more students started in kindergarten this year.

Through this year, there have been three Chinese programs, with one at Downes Elementary School and others at Frear and Simpson Elementary Schools, both of which take children from McIlvaine.

Seven Spanish programs have been established at:

“There continues to be great and widespread satisfaction with this initiative and the opportunities it is offering to the families and children of Delaware,” wrote independent world language consultant Ann Tollefson in a report given to the Delaware Department of Education following observations during this school year.

“When one considers that many families move at the end of any school year, this high retention rate [almost 98%] is undeniable evidence that children are happy in the program and parents are highly satisfied with the educational progress their children are making.”

Beginning in kindergarten, students learn their elementary math, science, and social studies in the second language, with half-day immersion continuing through fifth grade. By 4th grade, students are expected to be proficient enough to travel with their families in China or a Spanish-speaking country. In middle school, they will take honors language classes and complete school projects with peers in other countries. By 9th grade, they’ll be able to take and pass the Advanced Placement language and culture class.

As a separate part of the initiative, middle school courses were delivered online by Middlebury Interactive Languages, with weekly visits from conversation teachers.  More than 325 middle school students participated in a Chinese, Spanish, or French course this year and an additional 450 students will have the chance to enroll in the fall.

Research shows that immersion students perform as well or better than their non-immersion peers on standardized tests of English and mathematics, even when these assessments are delivered in English. They develop greater cognitive flexibility, increased attention control, better memory and superior problem-solving skills, while acquiring an appreciation for different cultural perspectives and practices.

This fact sheet details the program’s growth from its inception in the 2012-2013 school year, as well as the feedback from parents and the third party observer regarding the classes’ impact on students.