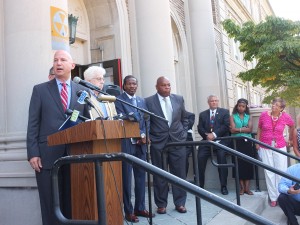 The newly named Priority Schools will share more than $5 million over four years to implement locally-developed, state-approved plans. The funding comes from several sources including federal School Improvement Grant and remaining Race to the Top resources.

“Today’s announcement reaffirms our commitment as a state to the hard work and dramatic changes required to provide these children from disadvantaged communities a real chance to meet their incredible potential. It’s not easy, but we have seen in Delaware and throughout the country that success is possible,” Governor Markell said.

Murphy said we must provide better opportunities for our children, and better supports to the educators who work with them every day.

“This is about ensuring that children are attending schools that have strong leadership and instruction, supported by the necessary resources, to give them the opportunities they deserve,” he said. “They cannot wait for incremental change. When they arrive at school each day, we must do a better job meeting their needs.”

The plan includes a Memorandum of Understanding (MOU) signed by the districts and the Delaware Department of Education by September 30 to provide the flexibility, autonomy, and financial capacity for school leaders to make progress through the approach that works best for their school, while holding them accountable for implementing significant changes. These leaders would develop a school plan to be submitted for approval to the Secretary of Education by December 31. 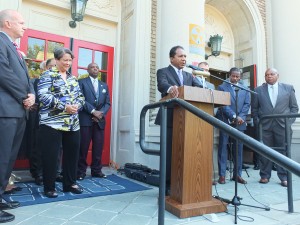 The 2014-15 school year will be a planning year with the Priority School improvements going into effect for the 2015-16 school year.

Calling the new course of action the most aggressive effort in the state’s history to improve outcomes for students at these schools, Murphy urged parents and community members to support their schools and educators in this work so their children have the opportunities they deserve.

While Murphy noted that many of the children in the Priority Schools face hardships such as poverty and language barriers that pose additional challenges for educators, he said those challenges are not insurmountable.

“We know that all children can be successful if they are provided the instruction and supports they need. We know this because we see their peers, who arrive at neighboring schools with similar challenges and succeed,” Murphy said.

For example, at Kuumba Academy Charter School in Wilmington, where 85 percent of children come from low-income families, students scoring at the proficient level range from 76 to 85 percent in both reading and math with the exception of third-grade reading.

And EastSide Charter School in Wilmington, a school with 91 percent of its children from low-income families, went from having only 15 percent of fifth-graders scoring proficient in reading in 2010-11 to 66 percent in 2013-14. In math, only 30 percent of third-graders were proficient in 2010-11; this year it was 73 percent. The school saw similar gains in other grades.

Indian River School District’s schools across the board show strong student performance despite sometimes large populations of students that often have additional challenges, including low-income and English language learner students. For example, at Georgetown Elementary, about 61 percent of the students come from low-income families and 34 percent are English language learners. Many of its students are excelling. Fifth-grade test scores last year showed 86 percent were proficient in reading and 77 percent were in math. 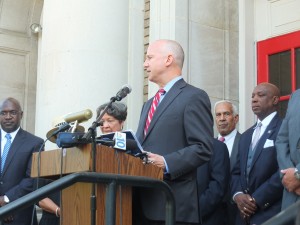 Indian River’s Clayton Elementary has a similar population with 61 percent from low-income families and 24 percent English language learners. Clayton fifth-grade scores show 77 percent proficient in reading and 90 percent proficient in math last year. The scores were even higher for the school’s third and fourth graders, where proficiency ranged from 82 to 92 percent, depending on grade and subject.

“This project gives our city schools the opportunity to implement current best educational practices that incorporate school/community-specific programming to address the unique needs of our schools,” said Wilmington City Councilman Nnamdi Chukwuocha, who chairs the city’s Education, Youth and Families Committee. “This is critical, along with the appropriate levels of DOE, district and community support. Only by working together will we prove to be highly effective at turning these schools around.

“Though not the magic wand, it is a step in the right direction and a great example of aligning our resources with our challenges for the sake of our deserving students,” he said.

The Rev. Dr. Meredith Griffin is the education chair of the Interdenominational Ministers Action Council.

“The education of our children isn’t the responsibility of the state alone. As a community we need to take opportunities, such as this one, to engage and make a significant difference in the City of Wilmington and beyond,” Griffin said. “Action is needed right now. While there are certainly other issues that impact our children in the city and their education, we must be willing to embrace bold steps that offer opportunities to dramatically improve the education our children receive.

“We cannot allow the search for a panacea to prevent us from supporting efforts that will ensure that the children in the City of Wilmington and beyond are more than adequately prepared to succeed in college or a career,” he said.

Red Clay Consolidated School District Superintendent Merv Daugherty said his district, the largest in the state, is committed to supporting the Priority Schools in this new effort.

“We view this as a great opportunity to offer additional support to the teachers and staff members of these schools so they can meet the academic challenges,” Daugherty said. “We look forward to working with parents, teachers and the entire school community to make sure we have a successful plan.”

“The Christina School District continues to be committed to meeting the needs of all children,” Williams said. “We look forward to working with parents, community leaders, and the Department of Education to support the academic growth and success of students in these three schools and across our district.”

The bottom 5 percent of schools were selected based on their students’ performance in state testing. Those that had less than 40 percent student proficiency in two of the past three years were eligible. Charter schools, which are under a different accountability system than district schools, were excluded. They operated under a system that allows the state to place them under “formal review,” which could lead to the loss of their charter if improvements are not made.