The three bills, Senate Bill 198 and House Bills 367 and 368 codify lender liability provisions and clarify what lenders need to do to maintain their liability protection. In addition to making a number of technical revisions to Delaware’s HSCA, UST and AST cleanup programs, the bills signed by Gov. Markell ensure that banks and lending institutions are not held responsible for contamination on the site solely because they foreclose or provide the financing on properties that may be contaminated with hazardous substances and petroleum products. 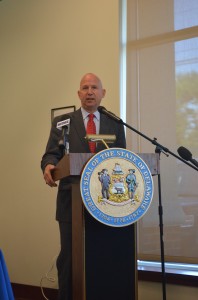 “These new laws represent continued progress to make Delaware a safer and healthier state for residents and businesses, while promoting safe economic development at previously contaminated sites,” said Governor Markell. “To encourage lending institutions to support redevelopment of these sites, we need to ensure that they will not be punished for the pollution that they did not cause. It is the individuals and entities who contaminate our environment who should be held responsible for cleaning up their mess to the greatest extent possible. I thank Senator McBride and Representative. Heffernan for their leadership in ensuring that DNREC continues to have the legal tools needed to protect Delaware’s groundwater resources, which are so vital to our environment and economy.”

“Historic releases of petroleum products and other hazardous substances have emerged as a major cause of groundwater contamination in the State,” said DNREC Secretary David Small. “It’s noteworthy that the Governor’s signing these bills today at the location of a former service station, where petroleum releases impacted soils and groundwater in the area. As with many complex groundwater contamination sites, this site is still undergoing remediation after almost two decades. Yet through the collaborative effort between a business developer and DNREC’s Tank Management and Brownfield Development Programs, the site was safely cleaned up to support redevelopment, bringing new business opportunities and jobs to the Brandywine Hundred area. These new laws support the repurposing of environmentally-impaired properties into safe, viable and thriving business sites.”

The HSCA Bill (SB 198) sponsored by Sen. McBride addresses issues raised by the Delaware Bankers Association along with suggestions made for the Governor’s Executive Order 36, which called for review and reform of all state regulations for better efficiencies in state government. The HSCA bill codifies lender liability provisions to ensure that banks are not held responsible for contamination on a site solely on the basis of providing financing for its redevelopment. SB 198 also allows DNREC to directly pay consultants working for a brownfield developer, with the developer’s consent – in addition to the current system where DNREC reimburses the developer for their payments to the consultant. The bill also makes HSCA enforcement consistent with other Department code and allows DNREC to issue a Secretary’s Order, followed by a public hearing (if requested), rather than requiring a hearing prior to issuing an order. 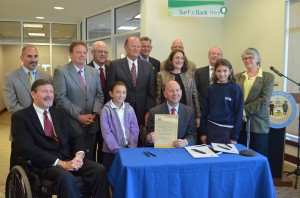 Senate Majority Leader McBride championed Delaware’s original  brownfields bill that passed in 2004, and which he said has succeeded beyond his hopes. A 2010 University of Delaware study found that each dollar invested in brownfields showed a return on investment of $17.50. “Brownfields are an important, but still underdeveloped resource for Delaware and, for all of us who want to see brownfields converted to new, productive uses, this is an important change in the law. I think we all hope it will encourage more development on these sites,” said McBride, who championed the new law. “It will encourage banks to make the loans needed to redevelop brownfields by not holding them liable for contamination and will allow the state to directly pay consultants working with businesses to redevelop these sites.”

The UST Bill (HB 367) sponsored by Rep. Heffernan also addresses lender liability in addition to clarifying who is responsible for releases from underground storage tank systems. The other major change is to the responsible party liability provisions by making the responsible parties who benefited from operation of the facility pay for the cleanup.  Along with technical edits, the bill clarifies DNREC’s right to access a property to confirm suspected releases and allows the Department to require an environmental covenant be placed on a property where residual contamination is left in place that might require additional remediation if the property is converted to another use.

The UST Bill (HB 367) sponsored by Rep. Heffernan also addresses lender liability. In addition the bill ensures that there will always be a responsible party who can be found liable to pay for a release from an underground storage tank. This will save taxpayer dollars and help ensure that the polluter pays for the cleanup. It will also assist in ensuring that abandoned gas stations enter Delaware’s successful Brownfields Program. The bill also clarifies DNREC’s right to access a property to confirm and clean up suspected releases. Additionally, it enables DNREC to require that an environmental covenant be placed on a property where residual contamination is left in place that might require additional remediation if the property is converted from commercial to residential land use. 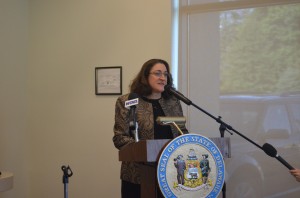 “When a gas station owner walks away from a property without removing the underground storage tanks or doing the necessary cleanup, it  becomes a problem for the community,” said Rep. Heffernan. “Leaking underground storage tanks are still considered a major  threat to our groundwater, and vapors from petroleum spills can release carcinogens to our indoor air. In Delaware, we need to do everything  we can to hold owners and operators who caused these releases liable for paying for the necessary environmental cleanups.

The AST Bill (HB 368) also sponsored by Rep. Heffernan provides similar environmental cleanup liability protections for lenders who foreclose on properties that contain ASTs, and also sets forth the criteria and process for lenders to maintain this liability protection. HB 368 also corrects a previous omission by specifying a timeframe for DNREC to file an environmental lien with the Recorder of Deeds.

“I’m very proud of these bills and the quality work of everyone who worked on them,” Rep. Heffernan said. “It took a true partnership between the business community, DNREC,  and the Attorney General’s office to get all of these bills done in one session. I’m glad they were all presented to the legislature together, which allowed us to take a holistic look towards improving how environmental cleanup work is done in Delaware.”