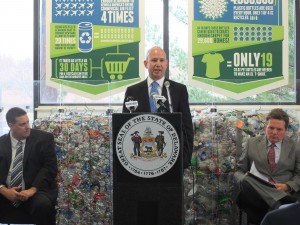 With a 42 percent recycling diversion rate in 2013, Delaware is well above the EPA national standard of 34.5% in terms of keeping recyclables out of landfills. The diversion rate has almost doubled since 2006 when the Recycling Public Advisory Council (RPAC), Delaware Solid Waste Authority and DNREC started calculating the state’s recycling rates.

Great strides in recycling have been made through a single-stream recycling plan that Governor Jack Markell signed into Delaware’s Universal Recycling Law in 2010. “I committed at the outset of my administration to making recycling a priority for Delaware,” Gov. Markell said, “and to do that, we needed to maximize recycling benefits and make it easier to recycle. We’ve established a system that provides universal services that are cost-effective and convenient, and that promotes jobs and economic growth. It makes environmental and economic sense for Delaware to recycle.” 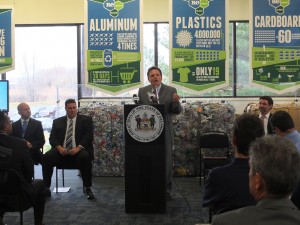 “Recycling has become more accessible and efficient throughout the state and we can thank the Universal Recycling law for that,” said DNREC Secretary Small. “We are conserving valuable landfill capacity and reusing materials which can save money and energy in manufacturing products. Where previous efforts failed to gain support, Governor Markell’s leadership resulted in an innovative and inclusive approach that redirected existing resources to implement the program. Universal recycling has been a success by most any measure, and we are on our way to meeting the targets established in the legislation.”

Senate Majority Leader David McBride has been a longtime champion of recycling and led the efforts to pass Delaware’s universal recycling law in 2010. Under that law, recyclables are placed in a common container and are taken to recycling centers, like the one at the Delaware Solid Waste Authority, where they are divided and sent off to be reused.

“We took steps to not only make recycling universal but we made it easy for people to comply with our law,” McBride said. “Because of that we’re a national leader in recycling with almost 42 percent of our recyclables finding a new use. That’s a great success by any measure, but it also shows that we still have room to improve.”

Representative Mike Mulrooney (D-Pennwood) was the lead House sponsor on SB 234, which created Delaware’s universal recycling program. Rep. Mulrooney noted it replaced the decades-old bottle deposit program in which more than 80 percent of bottles went unreturned – and often into a landfill instead.

“We had an unpopular system for 30 years that simply wasn’t working – our landfills were at or near capacity and something had to be done,” he said. “Today, we’re getting something in return where for decades we got nothing. We now have a voluntary system that has caught on. Just look up and down the street at how many households put a recycling bin out on trash day. We have more families recycling, which is a huge win-win for the environment, for our citizens and for the state. While I’m proud to have helped create this program that is helping move Delaware forward, we still have work to do.”

Delaware’s growing success with recycling has hinged on finding common ground among many entities: public, private and non-profit. Among them and spearheading the effort were the Department of Natural Resources and Environmental Control and Delaware Solid Waste Authority (DSWA), the private waste hauling community, local governments, retailers, environmentalists, recyclable materials processors and public supporters, all of whom contributed to passage of the Universal Recycling legislation.

“Prior to Universal recycling, Delaware was exporting local industry to our neighboring states,” said Brock “BJ” Vinton, a sustainable business consultant and chairman of the Recycling Public Advisory Council (RPAC). “Since the passage of the Universal Recycling Law, Delaware has seen a significant increase in our recycling rates and the establishment of two material recovery facilities representing over $10 million of new investment and new jobs. We are turning more and more of our waste into a resource and simultaneously driving valuable sustainable domestic industry as a result.”

“Universal Recycling has been a tremendous success. Delaware residents are truly embracing recycling,” said Michael Parkowski, chief of business and governmental services for DSWA. “Participation in DSWA recycling programs are at an all-time high, and we are seeing the results. Since 2006, there has been a reduction of over 500,000 total tons of material going into Delaware landfills and that is adding many additional years of landfill life.”

“In the last 18 months, working with the Delaware Solid Waste Authority, 90 new jobs have been created at the ReCommunity Recycling Center in Delaware,” says ReCommunity’s Robert Anderson. “These new jobs are the direct result of the Universal Recycling Law, which has driven 184,000 tons of recycled material to be processed for reuse. In other words, these materials are being turned into revenue for Delaware rather than in delivering these materials to landfills. Beyond economic and social benefits of revenue and jobs, the recyclables processed at ReCommunity reduced Delaware’s carbon footprint by 535,000 tons of carbon emissions or the equivalent of removing nearly 3 million cars from the road.”

The Universal Recycling Law is structured to maximize recycling rates and diversion of waste through a comprehensive statewide system of recycling that includes effective and convenient recycling programs for every Delaware residence and business. The first major milestone of this law was for waste haulers to provide their single-family residential customers with recycling services by September 15, 2011. The next milestone was for waste haulers and property managers to implement multi-family residential recycling by January 1, 2013. The third major component called for businesses, non-profits, organizations, municipalities, and schools to participate in a comprehensive recycling program by January 1, 2014.

The Universal Recycling Law established a grant and loan program to help businesses, non-profits and schools establish or expand a recycling program. Through this program, DNREC has provided more than $6.7 million to dozens of businesses, schools, municipalities, and non-profits to bolster recycling programs. Funding came from a $0.04 recycling fee paid by retailers to the State on certain types of beverages sold. Today (Dec. 1), this fee will sunset, meaning retailers will no longer have to pay the fee on beverage containers sold, nor should they be charging the fee to customers. The recycling fee provided revenue for the Delaware Recycling Fund and has been used for the exclusive purpose of funding specific activities and grants designed to enhance the state’s recycling rate and the diversion of recyclables that would otherwise be landfilled. Though the funding source will end, DNREC has enough revenue to support the grants program at least through 2015.

December 1st also marks the extension of the at-store plastic carryout bag recycling program. The at-store plastic bag recycling law – in effect since 2009 – has been given a three-year extension, meaning medium and large retailers in Delaware must continue to provide bins for the purpose of collection and recycling of plastic bags. Stores will also have reusable bags available to purchase for use in lieu of plastic bags. (Note that plastic bags are not acceptable in the curbside or drop-off center recycling programs in Delaware.)  Plastic bags are problematic for recycling processors because they become tangled in the sorting mechanisms at material recovery facilities. Fugitive plastic bags can have significant environmental impacts to animals and marine life, as litter strewn in public spaces, and can clog up storm water management systems.