Wilmington, DE – Earning an opportunity to build on recent commitments to expand quality early learning services for its youngest residents, Delaware was notified today that it has been awarded a $5.5 million dollar federal grant to offer more services for infants, toddlers, and their families. The state is projected to receive $1.1 million per year for five years under this award, which will help low-income families receive high quality, comprehensive services for their children.

“We know children begin to learn the day they are born, and progress made in the first months and years is vital to their life-long success,” said Governor Jack Markell. “As a state, we have made great strides in increasing access to quality early childhood programs for kids from disadvantaged communities. This grant supports our increased focus on infant and toddler care by providing better health, educational, and other services for children and families who need our help the most.”

The funding from the U.S. Department of Health and Human Services, announced today at the White House Summit on Early Education, will help the state expand on efforts announced earlier this year to make infant care a special priority, recognizing the importance of helping top early childhood programs subsidize the high cost of this work and provide more opportunities for low-income children.

Through the grant, infants and toddlers will participate in full day, year-round programs with comprehensive services that include: health and developmental screenings; expanded family engagement opportunities such as home visits and conferences; support for parents’ education and other needs; and health and nutrition services. 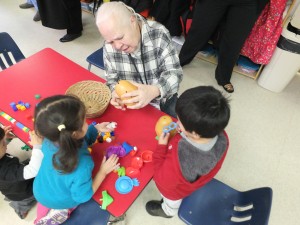 “We are extremely pleased to receive this award,” said Secretary Jennifer Ranji of Delaware Department of Services for Children, Youth and Their Families, which oversees the state’s early learning efforts. “This grant will enhance infant – toddler programs, while also ensuring families have access to valuable services to help them with their daily needs as they work toward brighter futures.”

In addition, the grant offers the opportunity to expand the specialized infant-toddler workforce by offering professional development and site-based technical assistance to staff who work with the State’s youngest population. This announcement follows the commitment announced by Governor Markell in February to provide additional funding for programs serving the state’s youngest kids. Through a pilot initiative, the state is allocating a pool of resources to be divided among qualifying programs – those rated with four or five out of five stars.

“This federal grant will help Delaware children and their families with the care, education, screenings and other needed assistance to help ensure our youngest residents get a great start in life,” said Delaware’s Congressional Delegation of Senators Tom Carper and Chris Coons, and Congressman John Carney (all D-Del.). “We know that focusing on a child’s education from the very beginning can set them on a path toward success throughout their life. These federal dollars will build upon the great work that Delaware is already doing and help the many families that rely on these important early education programs.”

The grant award allows the State to build upon the successful early learning work started as a result of the state’s increased investments, as well as funding won through the federal Race to the Top – Early Learning Challenge Grant (RTTT – ELC).  Governor Markell proposed, and the General Assembly passed, a $22 million investment in 2011 to increase early childhood’s budget by a third. That funding was the start of an effort to significantly upgrade the state’s STARS Quality Rating and Improvement System (QRIS) by increasing the number of high-quality early learning programs and giving the best programs the support they need to accept kids who could otherwise not afford to enroll.

Some of the state’s accomplishments in the past three years include: