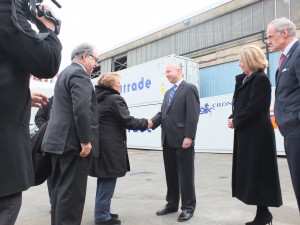 “We were honored to welcome President Bachelet to Delaware today,” said Governor Markell. “We are fortunate to have strong commercial relationships with Chilean growers and businesses through the Port of Wilmington, and visits like this aim to enhance those relationships and determine new ways in which we can work together to grow our economies.”

To commemorate the first visit by a President of the Republic of Chile to the Port of Wilmington, President Bachelet unveiled a plaque as part of today’s event. Sponsored by the Chilean Exporters Association (Asoex), the plaque will be permanently displayed at the Robert F. Senseny Administration Building.

“This visit aims to enhance and extend links between Chile and this region, so we can do more and better business, and generate more jobs and prosperity for our people,” said President Bachelet. “This is a great opportunity to learn about the operations of one of the most modern and relevant U.S. ports. And, of course, I am especially honored the plate was unveiled in commemoration of this visit as a symbol of brotherhood between Chile and the United States.”

The Port of Wilmington, the nation’s leading hub for imported perishable cargo and fruit concentrates, serves as a major East Coast gateway for Chilean fruit and has been handling shipments from the country since 1988.

“The Port’s relationship with Chile is a strong one built on years of cooperation and synergy. With a global economy facing times of uncertainty, partnerships like this are crucial,” said Alan Levin, Director of the Delaware Economic Development Office and Chairman of the Diamond State Port Corporation. “We applaud Chilean business and government officials, especially President Bachelet, for their role in this partnership, which has brought significant jobs and revenue to the State of Delaware.”

In 2014, Chilean fruit business accounted for more than 167,000 pallets and was responsible for 835 jobs; $48 million in related business revenue; $45 million in personal income for all those involved with this cargo; and about $4.4 million in tax revenue for Delaware and the region.

“We are extremely honored to welcome President Michelle Bachelet, the first Chilean head of state to visit the Port of Wilmington,” said Gene Bailey, the Port’s Executive Director. “Her visit is the highest compliment to our Port and to the efforts of men and women working here. Their hard work and dedication have been key to the commercial success of Chilean fruit with the North American consumer, and Chile’s commitment to our port for more than twenty-five years has been so important to the economic vitality of the Port of Wilmington and the surrounding region.”

Global Reefers NV, the successor company to Pacific Seaways, operates the only direct Chilean fruit express service between Chilean ports and the Port of Wilmington. The current shipment to the Port includes Chilean table grapes, blueberries, plums, peaches and other deciduous fruit. Those crops will be discharged from specialized reefer ships overseen by Global Reefers NV to the Port of Wilmington through April. 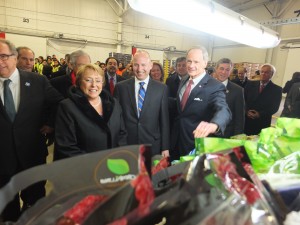 “Since 1988, the relationship between Chile and the Port of Wilmington has been vital to the economy of Delaware and the region,” said U.S. Sen. Tom Carper. “I look forward to strengthening that relationship – one that provides over 800 jobs and millions of dollars in revenue – for many years to come.”

In addition to fruit from Chile and other countries, the Port handles between 30,000-40,000 tons of sodium nitrate, potassium nitrate, lithium carbonate, potassium sulfate and related chemicals shipped from Química y Minera de Chile S.A. (SQM) to Wilmington, where it is stored and distributed by Intercontinental Services of Delaware LLC. These chemicals are used for industrial, agricultural and solar energy applications. The Port also handles large amounts of Chilean salt for various chemical processes used by DelDOT and others to battle snow and ice.

The Port offers the largest on-dock cold storage complex in North America. It is operated by Diamond State Port Corp., and is responsible for 5,200 family sustaining jobs annually, generating $384 million in business revenue, $360 million in personal income and $35 million in state and regional taxes.

“I was very pleased to join Governor Markell and Senator Carper in welcoming President Bachelet to Delaware,” Congressman John Carney said. “Millions of Americans enjoy fruit every day and probably don’t think very much about where it came from.  But, here in Delaware, we think about it a lot because the Port of Wilmington is the entry point for Chilean fruit that feeds families all across North America. The strong relationship that Delaware and our port workers have with Chile creates jobs and supports the economy of both countries. I’m proud that the Port of Wilmington plays such an important role in this exchange, and I look forward to building on this relationship in the future.”