Full remarks as prepared for delivery

Dover, DE – Governor Markell set his agenda for 2015 today, laying out a vision for Delaware to meet the challenges of the new economy and thrive in an era of technological innovation as the state builds on significant economic progress of the past few years. 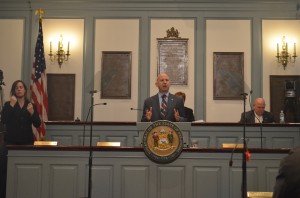 Saying the state continues to grow stronger, the Governor pointed to job growth that consistently outpaced the national average over the past 24 months. It has been the fourth fastest in the country over the past year.

“Six years ago, we faced an economy in freefall and a budget deficit that was skyrocketing,” said Markell as he delivered his annual State of the State address. “Tens of thousands of our friends and neighbors would lose their jobs and hundreds of millions of dollars of tough decisions needed to be made to keep our state afloat and serving its citizens. Dark times. But we knew if we worked together, we could help move our state to a brighter future. Which is why it gives me so much pleasure to be able to start today with this fact: There are more people working in Delaware now than at any time in our state’s history.”

In highlighting recent stories of job growth across the state, Markell announced today that Perdue is following up on its commitment by moving its agribusiness headquarters to Sussex County, adding 150 Delaware jobs.

“We have made great progress, but our rapidly changing economy poses significant challenges,” said Markell. “We can overcome these challenges if we embrace our future and seize the opportunities of a new era.”

Markell urged lawmakers and other state leaders to recognize that globalization and digital technology have transformed the economy. He said these forces threaten to leave many people behind as jobs are outsourced to other countries or new technology, but they also offer extraordinary opportunities if the state trains a skilled workforce, makes smart investments in innovation and infrastructure, and gives everyone a chance to reach their potential.

Embracing A Bright future for Delawareans in the New Economy

“I ask the General Assembly, our schools, our colleges, and our businesses to join me in committing to the Delaware Promise… By 2025, 65 percent of our workforce will earn a college degree or professional certificate. Everyone will earn at least a high school diploma.”

Markell announced three parts of the strategy to fulfill this promise. 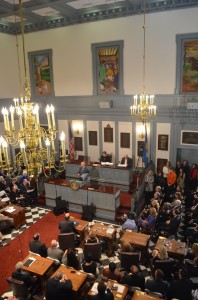 “Everyone can contribute to our state when given the chance, but efforts to expand our workforce have traditionally excluded people with disabilities. They miss out on the fulfillment of gainful employment, and employers miss out on the talents of so many.”

“Just as every student – every current and future worker – deserves a fair chance to adapt to the new economy, we must ensure that Delaware businesses can embrace the future and make the most of their opportunities.”

“The condition of our roads and bridges will deteriorate without more investment. It’s that simple.  On the other hand, investing in our infrastructure will promote long-term economic activity, while reducing commute times and improving road safety. And in the short term, we can put thousands of people to work.”

Embracing a Bright Future for Wilmington

“Over the past several months, I have been approached by hundreds of Wilmingtonians who love their city. They believe, as I do, that state officials have a profound responsibility to address violent crime. I’m confident that solutions exist… We need to do more to ensure that we take the most effective approach to fighting crime. And we need to do it now.”

Embracing the Future of Criminal Justice and Rehabilitation

“We know that one of the best ways we can build a safer city and state is to improve the chance that those who were involved with our criminal justice system can get a job when they return to their communities.”

“I would guess everyone in this chamber knows someone who has been touched by substance use disorder. And the problem is growing. Heroin incidents more than doubled in 2012 alone. Last year, Delaware saw a death from an overdose an average of every other day. That means someone’s father, mother, or child died yesterday, and tomorrow we’ll lose another father, mother, or child.”

“Recognizing our special obligation to veterans, nothing should disturb us more than the high rate of homelessness among former service members.”