Dover – A groundbreaking culinary event called Breaking Bread Behind Bars was added today to the lineup of 35 events in May during the 2015 MidAtlantic Wine + Food Festival. This dinner is a collaboration between the Delaware Department of Correction, Delaware restaurant group SoDel Concepts, and the MidAtlantic Wine + Food Festival to benefit skills training for Delaware offenders and facilitate their reentry to the community.

Breaking Bread Behind Bars will be held on Thursday, May 14 inside the Baylor Women’s Correctional Institution in New Castle, Delaware. The concept was initiated by the late Matt Haley, the James Beard Award-winning restaurateur and founder of SoDel Concepts, who approached the Department of Correction and MidAtlantic Wine + Food Festival last summer about organizing an event in a Delaware prison facility. Inspired by inmates who Haley and members of his staff had met through the Department of Correction’s culinary arts training programs, and driven by his own life experiences, he sought to support Delaware’s offender reentry efforts in new ways.

Haley proposed to involve inmates in the preparation of a meal, under the guidance of chefs from SoDel Concepts, and invite them to dine as guests at that meal. The inmates will be seated alongside business and civic leaders who could potentially facilitate employment after their release from incarceration. The MidAtlantic Wine + Food Festival agreed to organize the event and market it to business and community leaders.

BWCI offers a variety of programs for personal and professional development of inmates at all security levels. It also provides a range of treatment for physical and behavioral healthcare services, vocational training programs, counseling, religious services, and recreation opportunities. The inmates at BWCI account for approximately 7% of the statewide incarcerated population. Among the BWCI inmate population, 61% are white and 37% are black; 26% are under the age of 26, 47% are between the ages of 26-40 and 27% are ages 41 and above.

The Breaking Bread Behind Bars dinner will showcase the State’s expanding initiative to reduce recidivism and increase public safety by supporting the successful reentry of inmates into the community. Also included in these efforts are a number of programs for individuals who have been released from custody, including employment search resources, ongoing physical and behavioral health treatment, and social services. Together, these efforts are supported by Delaware’s Justice Reinvestment Initiative, statewide I-ADAPT program, the Delaware judiciary’s Reentry Court and numerous non-profit organizations that provide services to offenders.

“Matt Haley was an entrepreneurial success story who credited his own culinary training in prison with giving him the tools and the opportunity to turn his life around,” Governor Jack Markell said today. “I strongly support his call for us all to ‘pay it forward’ by providing second chances to offenders who seek redemption through hard work and gainful employment. We’re committed to expanding existing efforts to connect these individuals with training, employment, and other resources to support their successful reentry to the community, in partnership with social service organizations and with the support of willing Delaware employers. Thanks to this unique opportunity through the MidAtlantic Wine + Food Festival, community leaders have one more opportunity to engage with offenders in a unique setting and step up to be change agents in their lives.”

Douglas Ruley, Vice President and Corporate Chef of SoDel Concepts, said, “It is an honor to be part of such a groundbreaking culinary event with the MidAtlantic Wine + Food Festival and the Delaware correctional system. Only our founder, Matt Haley, could have envisioned a ‘family style dinner’ behind bars. Being a product of the correctional system himself, Matt was passionate about the rights and opportunities afforded to inmates both while incarcerated and upon release. We, as SoDel Concepts on Matt’s behalf, will continue his legacy with support to the State of Delaware and beyond. Breaking Bread will be as one-of-a-kind as Matt Haley was.”

Ajit Mathew George, Founder of the MidAtlantic Wine + Food Festival, said, “Having worked very closely with Matt Haley last summer on this dinner before his untimely death, I feel strongly about this partnership between the MidAtlantic Wine + Food Festival, the Delaware Department of Correction and SoDel Concepts, and bringing Matt’s dream to reality with Breaking Bread Behind Bars. I am not aware of any wine and food festival in the world that has created a dinner inside a prison with inmates joining as guests alongside business and civic leaders. My wife and I purchased the first two tickets to this dinner today and we cannot wait to sit with our friends in the business community behind bars for this remarkable dinner.”

SoDel Concepts is the award-winning restaurant group located on Southern Delaware’s Culinary Coast. SoDel Concepts restaurants include Fish On Bar & Grill in Lewes, Lupo Di Mare Italian Kitchen and Papa Grande’s Coastal Taqueria in Rehoboth, Matt’s Fish Camp and Bluecoast Seafood Grill + Raw Bar in North Bethany, NorthEast Seafood Kitchen in Ocean View, and Catch54 Fish House and Papa Grande’s Coastal Taqueria in Fenwick Island. Plate Catering and Big Thunder Roadside Kitchen operate from the Culinary Coast to all points of the Delmarva Peninsula. This independent, chef-driven restaurant group is committed to the vision of its founder and recipient of the 2014 James Beard Humanitarian of the Year award, Matt Haley: creating beautiful, simple food, developing talented employees and supporting the communities in which they do business.

Tickets are $150 and are being made available by invitation only through the MidAtlantic Wine + Food Festival. Members of the general public who are interested in purchasing a ticket to attend the dinner and support reentry programs and culinary arts training can join the wait list on the Festival website at www.mawff.org or contact Amy Dance at the MidAtlantic Wine + Food Festival, at 302-332-3788.

The MidAtlantic Wine + Food Festival will feature 35 events in Delaware, southeastern Pennsylvania, southern New Jersey and the Eastern Shore of Maryland between May 13 and 17. Over the last two years, the Festival has engaged 126 chefs and 28 winemakers from 6 continents, has issued 6,500 tickets, and has sold out 46 events. The Festival has drawn attendees from more than 15 countries and 17 states to events in 57 locations. 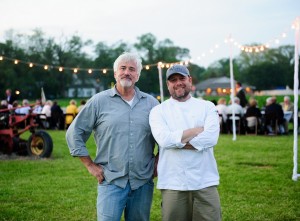