Dover, DE – The percentage of Delaware’s public high school graduates taking and passing college-level Advanced Placement classes rose considerably in recent years, according to new data from the College Board. Eighteen percent of the graduating class of 2014 passed at least one AP test with a score of 3 or better, up from 10.6 percent a decade earlier.

The number of graduates who took an AP exam sometime during high school doubled between 2004 and 2014 as did the number of students earning a score of 3 or better on a 5-point scale.

The College Board offers AP classes and tests in 34 different subjects. Students who score at least 3 may be eligible to receive college credit, which allows them to not only be better prepared for their future, but also save money by accelerating their progress toward a degree. 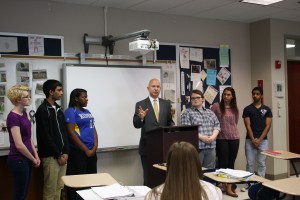 “Students who challenge themselves in high school have the best chance of succeeding in college,” he said. “We need to make sure students have access to the courses that best prepare them for the future and give them opportunities to earn college credit.”

The gains in AP Biology made by graduates over the past three years were particularly strong. Four hundred and forty 2012 graduates had taken the biology exam and 38.9 percent scored three or higher; among 2014 graduates, 615 took the test and 60.7 percent passed.

In a visit to the classroom of Caesar Rodney High School AP biology teacher Lisa Kane on Thursday, Gov. Markell praised Kane and other AP teachers and thanked them for pushing their students academically and giving them the support they need to be successful. “We know that teachers such as Lisa who are committed to their students can make a huge difference in those students’ lives and we as Delawareans should be grateful to them and give them the resources they need,” he said.

In 2012, 45 percent of Kane’s students scored at least a 3 on the AP biology exam. In 2014, 84 percent of her students passed the test. Kane, who has taught AP biology since 2005-2006, said she had an exceptional class last year. “The kids have to be willing to do it and I had wonderful kids last year,” she said.

Promoting college and career readiness has been a central part of the plan that the state has pursued as a result of the federal Race to the Top grant competition the state won in 2010. The Department of Education used grant funds to encourage and support the growth of Advanced Placement in the State. The state identifies promising students based on their scores on the College Board’s PSAT/NMSQT test, which can be taken by high school freshmen, sophomores and juniors. Based on that test, one in five sophomores have been identified as students with the potential to succeed in AP classes and encouraged to enroll in AP classes.

In response to requests from AP biology teachers, the state Department of Education made an online resource called AP Biology Insight available to them using grant funding. Biology Insight provides educators with teacher-developed resources such as performance tasks, labs and other hands-on activities to make it easier to teach challenging concepts and skills. The site also includes practice questions and answers for student use.

“Students like the practice problems that help them get prepared for the exam,” Kane said. “They can look at the explanations and they can work on their own and don’t have to ask me.”

Kane’s class was also given Chromebooks this year, which will make online learning even more accessible, she said.

Data released today shows the class of 2014 also made solid gains on:

Increasing college and career readiness and college-going has been a major focus of Markell and the Department of Education under Secretary Mark Murphy. In addition to the Advanced Placement gains, the number of student taking dual enrollment classes, which are college-level classes taken by high school students to also earn college credit, more than doubled between 2013 and 2014. In addition, the governor announced this week that the state’s “Getting to Zero” initiative, a partnership between the Delaware Department of Education, school districts and charter high schools, counselors and the College Board, had succeed in getting every Delaware student who was ready for college to apply and enroll.