Dover, DE – Following through on a charge announced during his State of the State Address in January, Governor Markell today unveiled plans to end veterans’ homelessness in Delaware. Joined by U.S. Department of Housing and Urban Development Regional Administrator Jane Vincent, Delaware State Housing Authority (DSHA) Director Anas Ben Addi, Department of Health and Social Services (DHSS) Secretary Rita Landgraf, among others, the Governor signed on to a challenge to end veteran homelessness, and addressed the state’s effort to find homes for all homeless veterans in Delaware by the end of 2015. DSHA and DHSS were tasked with developing the plan, which was presented during today’s event at American Legion Post 2. On any given night, 100 veterans in Delaware are homeless. 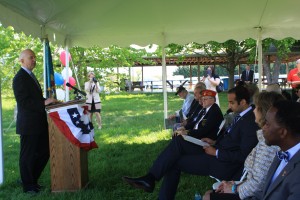 “Given our obligations to our Veterans, nothing should disturb us more than the continued high rate of homelessness among former service members,” said Governor Markell. “An estimated 280 Veterans will experience homelessness in Delaware over the course of 2015. With focused effort, along with collaboration between federal, state and local partners and the community, Delaware can and will be a state where no veteran is homeless.”

Last year, HUD, the U.S. Interagency Council on Homelessness, U.S. Department of Veterans Affairs, and the National League of Cities called on mayors across the country to make a commitment to end Veteran homelessness in their cities in 2015. Today, Governor Markell officially announced the Delaware would join that effort statewide.

“Too many Americans who’ve answered the call of duty struggle to readjust to life after military service,” said HUD Regional Administrator Vincent. “This announcement represents an important step in fulfilling a sacred commitment—ensuring that all Veterans have a home in the very nation they served to protect.”

A working group including state and federal agencies, nonprofit providers, and Veterans service agencies has developed a plan to address Delaware’s homeless Veterans. The report, released today, details actions including: identifying Veterans who are currently homeless or at a high risk of homelessness; improving connections and coordination between Veteran-specific and mainstream resources for homelessness prevention and rapid re-housing; and, creating 20 rental assistance vouchers dedicated to Veterans through the State Rental Assistance Program (SRAP), which provides integrated community housing with supportive services.

“Every Veteran should have the opportunity and support to live a full, healthy life in our state,” said Director Ben Addi. “In this plan, we identify strategies to both house Veterans who are homeless in Delaware now, and to ensure that Veterans who may face homelessness in the future are connected to the resources they need quickly and effectively.”

“While working with the Housing Authority to identify Veterans in need and to provide them with homes, we also are prepared to offer wrap-around social services to these men and women who have served our country,” said Secretary Landgraf. “For Veterans in need, a home is the foundation that will help to re-establish them in the community. The social services that DHSS can connect these Veterans to will provide further stability.” 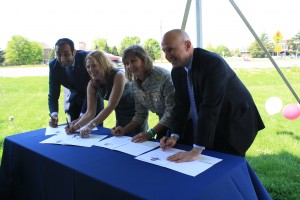 Today’s announcement featured the story of Gary Dawkins, an Honorably Discharged Veteran who served seven years in the United States Army and became homeless Due to the economy and an unstable employment history. Dawkins found shelter at the Home of the Brave (HOB), became a model resident and assisted other residents with their health and spiritual well-being. He also went to school through the Department of Labor WIA program to get his CDL Truck Endorsement License and became temporarily employed at the Milford Modern Maturity Center through the First State Community Action Senior Employment Program. After being at the HOB for approximately 20 months, Dawkins eventually became eligible for housing through the DSHA Public Housing program for seniors.

“My story is a prime example of how many resources coming together can bring a veteran from homelessness to stable housing,” said Dawkins. “I am glad to see Delaware committing to this challenge and to housing Veterans who are homeless.”

The Plan to End Veteran Homelessness in 2015 is available online.