For the fourth year, the six museums of the state of Delaware have joined the ranks of Blue Star Museums as a vehicle for outreach to members of the United States armed forces. 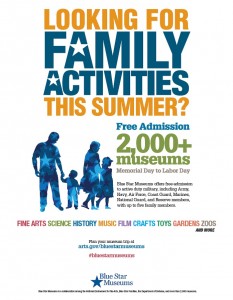 The program is a collaborative effort of the National Endowment for the Arts, Blue Star Families, the Department of Defense and more than 2,000 museums across America. It offers free admission to active duty military personnel including members of the Army, Navy, Air Force, Coast Guard, Marines, National Guard and Reserve, with up to five family members, from Memorial Day through Labor Day. Museums in all 50 states, the District of Columbia, Puerto Rico and American Samoa are participating in the program including children’s museums, fine art museums, history and science museums and nature centers.

Administered by the Division of Historical and Cultural Affairs, the state of Delaware’s six museums tell the story of the First State’s contributions to the history and culture of the United States. Although admission to the state’s museums is already free, participation in the Blue Star Museums program allows the division to expand its outreach efforts to military personnel and thank them for their service to the nation.