Dover – Heading out for happy hour? Stopping off for a nightcap? Getting one last drink before last call? All those terms take on a w 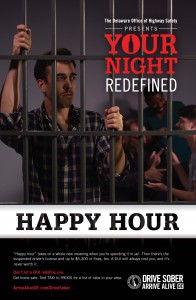 hole new meaning when you get stopped for driving under the influence (DUI).  Happy hour is now sitting in jail waiting for bail, nightcap is now taking a breathalyzer test, and last call is your only call from jail.  Don’t let a DUI redefine your night.  The Delaware Office of Highway Safety along with law enforcement across the state are cracking down on impaired driving and launching the 15th Annual Checkpoint Strikeforce campaign this holiday weekend.  Last year alcohol was involved in 54 percent of the 111 fatal crashes, which resulted in 67 individuals killed.

The first checkpoint of the season is scheduled for:

Sobriety checkpoints will be scheduled to take place each week during the six month long Checkpoint Strikeforce campaign along with DUI saturation patrols.  There will also be additional enforcement during peak holiday times including Labor Day, Halloween, and the month of December.

The New Castle County DUI Task Force will again be sworn in by the Delaware Attorney General to conduct sobriety checkpoints throughout the county during the campaign.  The swearing-in ceremony provides the legal justification necessary to allow police officers to make DUI arrests in towns outside their own jurisdiction.

The campaign’s enforcement activities will be supplemented by an all new intense public awareness and education campaign that highlight the fact that a DUI can redefine your night and your life. Paid messages will be placed on T.V. and radio, billboards, print, online, Pandora, movie theater ads, and store floor clings. See website www.ArriveAliveDE.com/DriveSober.  Paid messages will also be included in Spanish print and radio ads.  OHS will continue to tally the total number of DUI arrests made each week in Delaware and display the total on billboards in New Castle County and Sussex County and on the website www.ArriveAliveDE.com/DriveSober.  OHS’s corporate partners will also receive flyers, posters, and table tents to display and help spread the message.

Those convicted of a first time DUI offense in Delaware may spend up to 1 year in prison, and will lose their license, attend an 8-week DUI treatment program and pay thousands of dollars in court, treatment, DMV, and lawyer’s fees (approximately $6,300).

Checkpoint Strikeforce is a regional sobriety checkpoint campaign aimed at arresting DUI offenders by using high visibility enforcement to deter those who would otherwise choose to drink and drive.  The campaign is a six month long effort coordinated locally by the Delaware Office of Highway Safety and involves setting up weekly DUI checkpoints & patrols statewide.  Delaware had 4,086 DUI arrests statewide for 2014.