Video and Photos of the event

Issued 168 years later in the same courtroom as his conviction

Dover, DE – In an effort to right a historic injustice, Governor Jack Markell today issued a pardon for Samuel D. Burris, a free black man from Delaware, who, on Nov. 2, 1847, was convicted of aiding slaves escaping from their owners. The ceremony, which took place in the same courtroom in which Burris was convicted 168 years ago, was attended by several of his descendants. (Full text of the pardon is available here.) 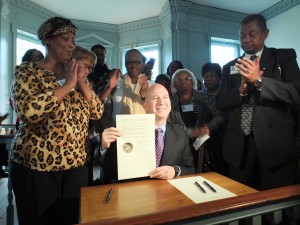 “This pardon is an extraordinary act in recognition of a historic wrong that cannot be corrected by a single stroke of a pen,” said Governor Markell. “But while we cannot change what was done more than 150 years ago, we can ensure that Mr. Burris’ legacy is appropriately recognized and celebrated. We affirm today that history will no longer record his actions as criminal, but rather as acts of freedom and bravery in the face of injustice.”

As a conductor on the Underground Railroad, Burris is known to have successfully led several enslaved people from Maryland and Delaware to freedom. After an 1847 attempt to bring a young woman, Maria Matthews, out of Kent County, Delaware to Pennsylvania, Burris was captured and charged in three cases of aiding slaves escaping from their owners. Found guilty in two of the cases, he was fined, sentenced to prison and thereafter sentenced to be sold into servitude. After being “purchased” for $500 by Wilmington abolitionist Isaac S. Flint, he was taken to Philadelphia where he was reunited with his wife, children and friends. He continued to work for the abolitionist cause until his death in San Francisco in 1863.

During today’s event, Ocea Thomas, a descendant of Burris, read a letter he wrote dated March 29, 1848. Addressed to his brother and penned while in a jail cell just steps from where today’s ceremony took place, it read in part, “My religion teaches me to believe that as the condition of our heart is when our mortal life leaves us so judgement will find our never dying souls. And if so, what will be the condition of those who lived and died in neglect of that golden rule: do unto others as you would that others should do unto you?”

The ceremony also included the unveiling of a historical marker honoring the noted Underground Railroad conductor. The marker was recently installed near Burris’ home, southwest of Camden, DE at the intersection of Route 10 (Willow Grove Road) and Henry Cowgill Road.